They Hate Our Freedom

April 26, 2012
Open season has recently been declared on Whites, with the summer threatening to bring full-blown race war and the complete collapse of order in the cities. The American dollar is a worthless bit of fiction. The "jabs" in the private sector are vanishing. Thousands of Whites are going to be glued to the electronic synagogue today watching the NFL Slave Auction, getting whipped into a drunken rapture as "their" team selects an overweight negro thug, or booing and cursing should one of the small minority of White players get the nod.

Clearly, the time is right to accelerate an illegal secret war that has nothing to do with our national interests and everything to do with our slavish devotion to the aims of zionism. This time it's Yemen. Maybe next week Syria or Iran or Pakistan, or...

The decision to give the CIA and the U.S. Joint Special Operations Command (JSOC) greater leeway is almost certain to escalate a drone campaign that has accelerated significantly this year, with at least nine strikes in under four months. The number is about equal to the sum of airstrikes all last year.

The expanded authority will allow the CIA and JSOC to fire on targets based solely on their intelligence “signatures” — patterns of behavior that are detected through signals intercepts, human sources and aerial surveillance, and that indicate the presence of an important operative or a plot against U.S. interests. 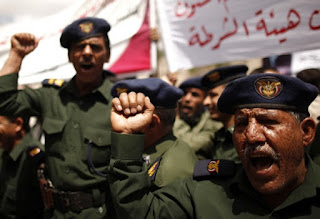 This mess is our business for some reason.

You have to laugh at the idea that this somehow represents "US Interests" while defending our southern border from foreign invasion apparently doesn't. This is an age of madness. Would any American support Yemen drone strikes if it was put to a referendum? Probably not, even as debased as we've become. This has nothing to do with the will of the people. This is Israel controlling America, as they have boasted in the past.

Enjoy your slave auction, White America. Drink your beer and eat your fatty foods. Hoot and holler for your negroes. Throw up in a dumpster or maybe become the latest victim of a negro hush crime while trying to stagger home. Meanwhile, everything is falling apart. This is what Democracy looks like.
Drone Attacks Endless Foreign War NFL Slave Auction War for Israel Yemen Zionism