May 18, 2012
After decades of steady marxist attacks on traditional White America, the cheapening of citizenship, open borders and a welfare state that encourages the dark hordes to breed out of control with full knowledge that Uncle Sucker will foot the bill, it has finally happened. Whites now represent less than half of the children being born. The plan to create a country of brown slaves ruled by wealthy kosher money thugs has succeeded beyond even the wildest expectations of the nation wreckers.

There isn't a single mainstream politician who will call attention to the coming demographic disaster. The White tax payer is being replaced by non-White system leeches noted for their violence and refusal to adhere to traditional American values. This is not sustainable. The end game is either transformation into another Brazil or racial Balkanization. What we once called America is probably beyond saving. 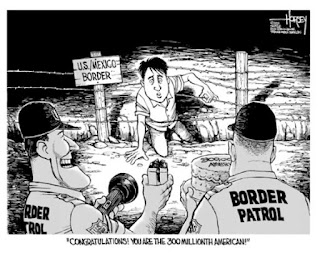 Non-Hispanic whites accounted for 49.6 percent of all births in the 12-month period that ended last July, according to Census Bureau data made public on Thursday, while minorities — including Hispanics, blacks, Asians and those of mixed race — reached 50.4 percent, representing a majority for the first time in the country’s history.

Such a turn has been long expected, but no one was certain when the moment would arrive — signaling a milestone for a nation whose government was founded by white Europeans and has wrestled mightily with issues of race, from the days of slavery, through a civil war, bitter civil rights battles and, most recently, highly charged debates over efforts to restrict immigration.

This is the end of Old America. In its place we now have a deeply fractured land of government entitlements, wealthy criminal bankers, sneaky foreigners who don't speak a word of English and sullen negroes preying on Whites for sport. This new land of "diversity" is a house of cards just waiting for a strong wind. This summer, that wind is going to be blowing. We're going to experience non-White criminality on an unprecedented level. Will it awaken Whites to the enemy that is now right at the gates? We can only hope.

It only took the marxists about half a century to transform a 90% White America of prosperity and economic might into the sad mess we now live in. Fundamental Transformation. Hope and Change.

Would the last White please turn the lights out on the way out? Thank you.
Demographic Time Bomb Immigration Act of 1965 It's Free Swipe Yo' EBT Me No Habla An-glee White Dispossession