May 31, 2012
I guess I must have some sort of psychic powers to correctly predict the explosion of non-White violence over Memorial Day weekend. That or I don't sleep in a kosher fog of sports and materialism. I'm not sure which. Either way, the 85 I.Q. squad was behaving in a fashion that is completely predictable. 40 shootings in one long weekend in one ruined Amerikwan city. Just more business as usual for the dark hordes.

This Memorial Day weekend turned into a bloody massacre in Chicago. There were a total of 40 reported shootings, which left 10 people dead and a dozen injured.

The recent homicides have doubled as compared to Memorial Day 2011 and according to homicide records, there have been at least 200 homicides so far this year compared with 134 during the same period in 2011. That's a 49.25 percent increase over the last year.

On Tuesday, Mayor Rahm Emanuel and Police Superintendent Garry McCarthy are expected to hold a news conference where they discuss two new crime reduction strategies as shootings are up nearly 14 percent over last year. 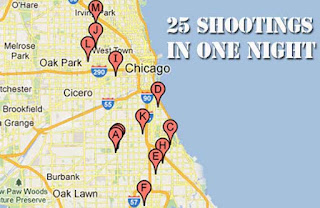 Nothing to see here. Please return to your consuming, Whitey.

The time has come to discuss crime reduction strategies. The obvious ones, like allowing police to profile or segregating individuals by race are presumably not on the table. We'll get some hand-wringing, some Kosher warm wind, and a return to trying to pretend that all is well in Rahm's plantation.

The "African American" commits between seven to ten times the violent crime as Whites. The low intelligence, lack of future orientation, media incitement and feckless legal system combine to create situations like Memorial Day weekend in Chicago. The same failures, the same content of their character, the same lame solutions, over and over, as civilization circles the drain.

If you're White you owe it to yourself to be armed and avoid Black areas. It's just that simple. Until some sort of sanity is restored among our increasingly corrupt and feckless rulers it's the only option that makes any sense. Let these once great cities melt down into Mogadishu-style battlefields. Just make sure you're at a safe distance.
85 I.Q. average Chicago Midwest Mogadishu Pathology of the American Negro Rahm Emanuel The Chicago Plantation