May 14, 2012
I've decided to make Good News Monday a permanent fixture of this blog, at least until it becomes impossible to find stories to fit the theme.

It's already getting difficult.

The best I could come up with for this week is a temporary defeat in the endless marxist quest to market unnatural evil. The destruction of the traditional family is one of the cornerstones of Frankfurt School communism and to that end we've seen the deliberate infliction of feminism, promiscuity, single mothers and the sodomite agenda on The West. The success of this program of corruption has been simply staggering. Meanwhile the supposed defenders of "traditional values" have gone into hiding. Rare is the repelling-con that will even call sodomy a sin these days, let alone campaign against it.

The only ones not fully cooperating with this program of nation-wrecking are the peasantry. For some reason there is still resistance to the triumph of the wicked among the average proletarian.


North Carolina voted Tuesday to outlaw same-sex marriage, which was already prohibited in the state. Supporters pushed for the constitutional amendment, arguing that it is needed to ward off future legal challenges.

Voters approved the amendment by a 61%-39% margin with all counties reporting, according to unofficial returns from the State Board of Elections.

"It is a very sad day in North Carolina," said Tori Taylor, 23, a Charlotte resident who voted against the amendment. "There were a lot of college students, young professionals who came out to vote. We have gay friends. A lot of us are integrated to that culture. Do you think your friends should have the same rights? It's black and white. Of course, they should."

The evildoers still can't win a non-fixed fight, despite the endless propaganda about "changing values" and "the new tolerance" and all the vomit-inducing rest. It's a rare victory for Normal America. It could be one of the last ones. Still, it's something. Despite the full control and support of the media, the educational system and our government the sodomites still lost. 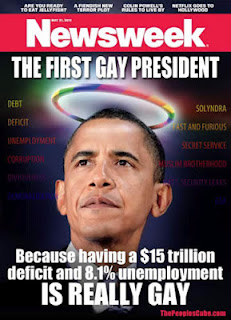 Also "The First President to Live Under a Different Name in Indonesia."