May 25, 2012
It's here. Memorial Day weekend, the unofficial start of summer, is expected to bring a heat wave across this nation. It's also expected, by those who no longer believe the comforting lies, to bring more black behavior that is not atypical or outside of normal parameters in any way. In other words swarm attacks on Whites, mob robberies, shooting Whites for no reason, "robbery gone wrong," and all the rest of the Non-White nonsense that is reaching a critical mass. This summer is going to change everything. The secret, one-sided race war is going to be dragged into the light.

Meanwhile, it's time for blacks to honor St. Trayvon.

In an effort to better educate students and their parents about race relations and social injustice, a D.C. elementary school has declared Friday “Trayvon Martin Day.”

Sounds very progressive. Students will presumably learn about the rights of half-jew, half-latinos to self-defense.

Malcolm X Elementary Principal J. Harrison Coleman says that she hopes the lesson will help reduce the needless violence and bullying in the community.

Making excuses for non-White criminality generally does not reduce said criminality. It actually, believe it or not Principal Coleman, emboldens it.

Coleman said that every adult who attended the seminar would receive an Arizona Iced Tea and each student would get a bag of Skittles.

...and each honky pig pink person will get the chance to be a victim of a dark horde or senseless shooting. Fun! 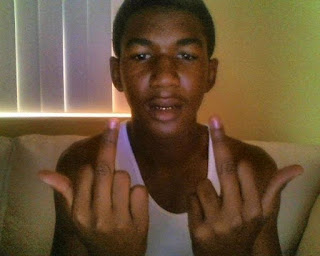 Next step: getting this on a U.S. postage stamp.

Obviously this is going to be nothing but a "kill Whitey" seminar full of hooting, hollering, territory marking, attempts to make themselves look larger and the like. On the eve of the summer of full-blown one-sided race war it seems, at best, inappropriate.

I'm only going to say it one last time. Be armed. Avoid black areas. Avoid areas they are likely to congregate. You do not want to be one of the forgotten victims. You will not get your own holiday or legions of apologists. You'll just be another victim. Don't let it happen.