November 16, 2012
While some are resisting the steady Islamic conquest of Europe the more common reactions range from "oh well" apathy to outright submission to the invaders. In Germany, a nation that was perhaps irrevocably damaged in the years following 1945, new heights of cowardice and surrender are being reached, perhaps even exceeding the gutless dhimmitude in El-France and Great Britainistan. Now Germans are trying to be as accommodating as possible for the jihadans by aping their language and culture. It's hard to believe the land of Frederick and Bismarck is capable of such a pathetic display.

For years, the focus of the integration debate in Germany has been on the assimilation of the Turkish migrant population into German society. But now some Germans are beginning to consider it their responsibility to integrate with their Turkish neighbors -- and are going to language schools to learn Turkish.

After failing to somehow alchemize genetic, racial and religious aliens into good little Germans some other solution is needed. Obviously something sensible, like deportation, is off the table. Instead, we must lose our national identity and culture as a show of good faith to the invading muslim scum.

"When I first came to Germany I couldn't even find a partner to do a language exchange with," says Isik, laughing. "But in the last five years there's been a real rise in demand. Business is booming."

No one ever went broke in the "Death of the West" industry. 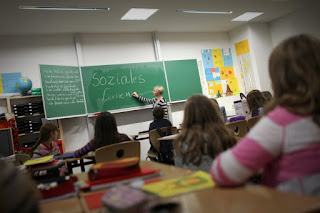 Can you teach me how to dhimmi?

Olaf Zimmermann, managing director of the Arts Council of Germany, believes that the debate about the integration of guest workers is outdated. "That issue is a thing of the past. Historically, Germany and Turkey have a lot in common," he told SPIEGEL ONLINE. "Turkey is the most important bridge we have to the Islamic world and we should have the courage to cross it."
The deceitful language of communist nation-wreckers. First declare the death of the west a settled issue. The typical "there's nothing you can do and it would be wrong to do it anyway" line we've heard from our enemies so many times. Then, just spew lies. Germany and Turkey have next to nothing in common. This is obvious to anyone but an idiot. Only the protection of the controlled media and traitor government allows such nonsense to go by unchallenged. You don't want to lose your job or place in polite society, right?

"Well educated, left-wing people are more open already," says Isik. "We need to find things that appeal to less educated, working-class people too. We need to find a way into consumer culture."

Yes, it's only the absolutes dregs of German society that don't want to play muslim dress-up. Those who have been through the communist indoctrination centers are nice and easy to control.

Negroes have Africa. Orientals have Asia. May-hee-cans have May-hee-co. Whites have nothing. We must open our countries to racial, religious and genetic invaders in order to propitiate imaginary sins from before any of us were born. This White genocide must be challenged and reversed. Who in Germany will take up the sword of Barbarossa? Or will you sit in a classroom learning an alien language while your future disappears beneath a brown wave? Those are the choices.
Death of a Nation Demographic Time Bomb Dhimmitude Europe for Whites Germany Immigration Muslims Religion of Peace Turkish Language Turks White Nations