December 19, 2012
Even the suspicion of being "racist" can destroy a White person's life, no matter how pathetic and groveling the inevitable apologies are. Whites must constantly have the "Soviet look," making sure not to be guilty of speech crime or face crime when the kommissars of cultural marxism are watching. The truth is no defense. Should a White actually engage in physical violence with a negro, no matter how justified by self-defense, we can expect the full weight of the media to fall on them. There will be cries for "social justice," racist negro groups making death threats while the law looks the other way and a trial by media that invariably delivers a guilty verdict.

When a negro attacks a White, it's a little different. The worst possible condemnation is turning the racist violence into a hush crime and sticking it in the memory hole. Usually, there's excuse making and explaining how the legacy of slavery and pilgrims are really to blame. At the extreme end, the criminal negro is made into a sort of marxist anti-hero, praised for their "courage" and given a plum job in a communist organization.

Theo Shaw remembers searching through a law book for answers while sitting in a jail cell.

I can imagine that "search" from this 85 I.Q. criminal: "Dey ain't be no pictures up in dis bee-atch. Dis be wack. All I done wuz try ta kill whitey. Dis races."

Can we find that loophole where brutalizing a White victim in a swarm attack for purely racist motives is not considered a crime? Hint: "play race card."

The two friends were among the six black teens, known as the "Jena Six," who were accused of beating up a white classmate at Louisiana’s Jena High School. The local prosecutor's decision to charge them with attempted murder ignited a firestorm of media attention and public outrage across the country, raising troubling questions about race and justice in America.

How a horrific six-on-one beating with no motive other than hatred for Whites can be considered anything other than attempted murder is a mystery. I like how we get "black teens" this time. Just say teens, we know what it's code for.

“I really didn’t have a plan [after high school]. I lived in a poor community,” said Shaw, who later reached a plea agreement that allowed him to put the case behind him. “That experience kind of changed my whole path. It awakened a desire within me to attend law school.”

You can't make this stuff up. Time to put my senseless animal attack behind me (I wonder if it was that easy for the White victim) so I can be an AA lawyer. This country is terminally ill. 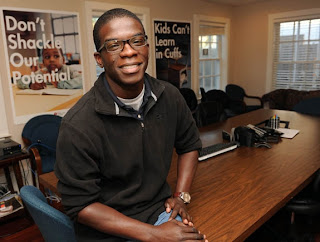 I think genetics has already shackled it.

Today, the 23-year-old carries that jailhouse experience with him as he works with incarcerated youths and adults as a community advocate for the Southern Poverty Law Center in New Orleans. It’s an opportunity that he believes will serve him well when he is a lawyer one day.

Another good kid, turning his life around. With the help of communism and racial preferences the sky is the limit, assuming he doesn't engage in another racist pack attack.

Shaw and four other members of the Jena Six ultimately pleaded no contest to simple battery, a misdemeanor, in 2009. Under the plea agreement, they received unsupervised probation for seven days but no additional jail time. They each paid court costs and all but Shaw were assessed a $500 fine.

If you were wondering how much value you have as a White person in this current hopelessly broken system, here's your answer. A savage gang attack motivated by racism carries about the same penalty as illegally parking your car, loitering or spitting on the sidewalk. The system wants us dead.

It's truly amazing that a game of polar bear hunting opens so many doors for a criminal negro. You'll note that the attack wasn't condemned in any way in this article. If anything, there's a hint of approval in between down-playing how serious it really was. The nation wreckers want White genocide. We've been marked for extinction. The system now rewards racist negroes that victimize Whites. We need to start planning our exit from this mess and preparing to build White nations.
85 I.Q. average AA Lawyer Jena Six Louisiana Pathology of the American Negro Racist Criminal Negroes As Heroes Robert Bailey SPLC Teens Theo Shaw White Genocide