The Negroes That Stole Christmas

December 06, 2012
There are few fonder memories I have than looking back at Christmas when I was a child. It was a special time, when family comes together, when everyone is united in goodwill. It was a call-back to Old World traditions and a simpler past. Above all, it was unapologetically White, European and Christian. As such, it has become a prime target for marxist nation-wreckers and the yearly assaults on this ancestral memory have become very tiresome.

The death of White America means the death of our institutions, it means "holiday trees" and made-up negro nonsense. It means rat-faced scum with little caps on the back of their heads lighting a giant menorah in front of the White House while local nativity scenes are removed. It means the endless effort to appease radical islam, despite the obvious reality that nothing short of total conquest will ever satisfy this death cult. It means crass consumerism, Chinese junk and now, negro home invasions.

There is no escape from the madness of a mixed society. Does anyone still wonder why segregation used to be the national policy? 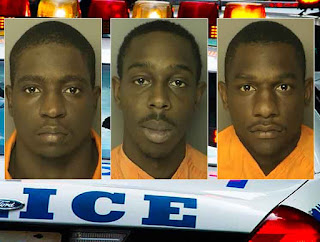 According to the victims, the three suspects held them at gunpoint and forced them to get on the ground while they ransacked their home. A police report states that the suspects separated the parents from the children before robbing them and stealing one of their vehicles.

Unarmed victims. Consider it a "Christmas miracle" that no rapes or murders took place. In yet another miracle the simians were actually netted and sent off to the "crib."

Neighbors near the crime scene say home invasions and burglaries are becoming more and more commonplace because of limited police patrols and close proximity to the North Carolina Border.

This is the first time I've ever heard a "border" blamed for criminality. We certainly wouldn't talk that way about our border with may-hee-co, that's for sure. Also, we need more police state. Maybe cameras everywhere. Anything but actually naming the real cause.