January 09, 2013
A welfare state never leads to any upward mobility for the "poor" but instead becomes a self-sustaining cycle of parasitism that apparently has no bottom floor. Here in the U.S.S.A. the government giveaways are used for alcohol, pornography and strip clubs and don't forget expensive Chinese sneakers. The upshot of this is we're forced to pay twice with school food programs just to insure the next generation of big government dependents don't starve to death. Pointing out this pathology is wrong and probably racist, so the problem just keeps getting worse. Cultural marxists in our criminal government have compared these welfare leeches to government workers. In a way, they are. Their job is to vote for communism every four years.

What will the 47% look like when they actually are the majority and Whites have been exterminated and driven to society's margins? For the answer we can look to a place where that process has already been completed: South Africa. In what was actually a civilized nation under White rule we now get a good look at the end product of communism and the negro anti-soul.

Pregnant South African women are deliberately drinking large quantities of alcohol to harm their unborn babies in a bid to earn more welfare money, it has been claimed. Expectant mothers living in the Eastern Cape, one of the poorest areas in South Africa, are binging on a 'moonshine' type drink which contains battery acid - with some drinking up to five and six bottles a day.

This is what Mandela and the other marxist swine fought for. Brown creatures inhaling battery acid to damage an unborn baby. Government dependency and contempt for life taken to its natural conclusion. Coming soon to a White nation near you.

It has been reported they do it to claim a disability benefit from the government - using their disabled children as a source of income.

The negro anti-soul. How long until Detroit produces a story like this, assuming it isn't happening there already?

Video taken by Sky News shows a mother drinking a homemade brew called 'kah-kah' while heavily pregnant. 'If I don't drink this, I'm like someone who is sick,' one woman told Sky News.

Pregnant negro sows getting "faded" on "kah-kah" in order to get the handouts. After the death of White civilization this is the profound ugliness that remains. The endless black night. We have arrived in the heart of darkness. 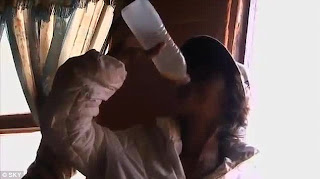 Sippin' on dat "Obama Soda."
The addictive milky brown brew is made from yeast, water and battery acid. It is sold in illegal drinking dens called 'shebeens'.

Will Rahm Emmanuel blame the coming Chicago "shebeens" on pilgrims or jim crowe? All signs point to yes.

Pumping out moronic (even by negro standards) children to get more of those government rands. It's free, swipe yo' EBT. Get paid by the White suckah, drink dat kah-kah.

Another unbelievable glimpse of negro pathology in "The Mother." Today's African all vs. all story is tomorrow's U.S.S.A. story on the path we're currently on. There is no end to the madness of statism and kosher communism. The only solution is liberty, republics and White nations.
47% of Voters Communism Fetal Alcohol Syndrome It's Free Swipe Yo' EBT Kah-Kah Shebeens South Africa The Heart of Darkness Welfare State