January 10, 2013
The marxist nation-wreckers have many weapons that are regularly deployed against Whites. The negro. The may-hee-can. Feminism. Materialism. The sodomite agenda. Radical Islam. While most of these kosher evils have reached a point of saturation and diminishing returns, the "religion of peace" is still rapidly expanding and sinking its hooks into the soft flesh of today's U.S.S.A. Just like with other insane and abhorrent concepts like divorce at will or anonymous buggery as a civil right this growth requires that a nice happy face be slapped over the festering wound. The rot needs to be marketed, needs to be disguised as something happy and desirable. If the wire-pullers can do this for a lifestyle that revolves around damaging the rectal tissues for sexual gratification they should be able to do it for anything.

Or maybe not. Making a frothing jihadist into something that will appeal to the average swipple is proving a tall task.

So we get "My Jihad" a series of bizarre commercials for the false prophet and his hell-spawned death cult that are plastered on Chicago buses. In these cute little ads, full of pastel colors and women who are not fully veiled and as such would be stoned to death under sharia, jihad as presented as harmless and even sickeningly banal. 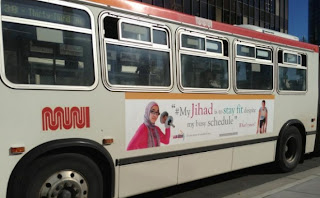 As with most marxist narratives, stupid old reality has to step in and ruin everything.

A man threatened to blow up a CTA bus and told police he was "jihad against the white devil" this week, causing evening rush hour passengers to flee in fear for their lives, authorities said.

Yup, back in the real world this is the behavior of negro muslims. Kill Whitey. We are forced to live with these cultural and racial aliens that hate us.

Several passengers told police that Russell made derogatory and racial remarks and threatened to “blow this (expletive) up,’’ the report said.

Rosa Parks would be so proud. From "back of the bus" to jihad against pink people in just half a century of long marching through the culture.

Russell also began yelling racial slurs at responding officers and said he was “jihad against the white devil,’’ the report said.

Put that in nice pastel colors and send it as a "tweet." Be sure to include this picture: 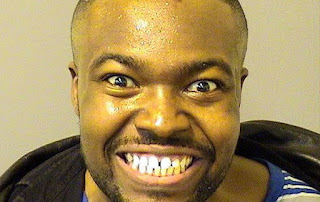