February 12, 2013
As a nation we're rapidly approaching the final tipping point, where the black and brown parasites will outnumber the White tax-paying sucker. This point has already been reached in many of our cities, leaving bankruptcy, crime, massive corruption and the endless failure of the alien races. Efforts to lure Whites back into this Heart of Darkness are often undermined by the sort of negro nonsense that is generally ignored by the dinosaur media. Without Whites spending, the system collapses under its own weight. We can expect this same collapse for the entire U.S.S.A. very soon.

City boosters hoped a downtown rampage by a horde of teenagers Saturday night wouldn't dissuade visitors from returning to the city.

Here's the opening paragraph I wrote after it has been translated into marxist-correct language. "Please come back Whitey, we need dat paper. We dyin' here." Part devil, part child.

Nearly 100 teens descended on downtown, picking fights, running into businesses and being chased by police by car and on foot.

The end of civilization, a police state fighting a losing battle with "teen" criminals. The profound ugliness of modern Amerikwa. 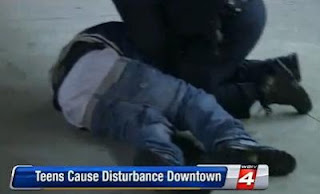 2013 Detroit summarized in one picture.

Stephens said the clash apparently involved some type of dispute or rivalry among neighborhood youths.

The animal mind of the negro. Marking territory, making itself look bigger, hooting and hollering. These creatures vote in elections and receive hand-outs paid for by White workers.

The chaos occurred near the Motown Winter Blast, the popular seasonal event at Campus Martius. It wasn't known whether the event had drawn the combatants to the area.

Malik Shabazz, a community activist who belonged to a gang as a youth, criticized the teens' behavior but said it's a consequence of the plight of city neighborhoods. 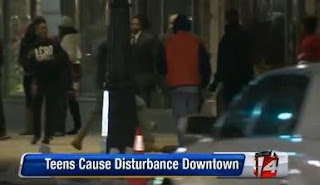 Scenes from a dying nation.

At one point, teens wearing ski masks entered American Coney Island on Lafayette and began smacking customers and tossing chairs, according to broadcast reports by WDIV (Channel 4) on Saturday night.

Negro pack attacks. The content of their character. We are not equal.

"Teens" act up and the dinosaur media covers up. It's getting harder and harder for the kosher wire-pullers to keep lying about the pathologies of the negro and may-hee-can. We need to remove these elements and establish a White nation. No more Detroits, no more Californias. It has to end.
100 Teens Black Pack Attack Detroit Dinosaur Media Malik Shabazz Midwest Mogadishu Pathology of the American Negro Ruins of Detroit The Heart of Darkness