February 25, 2013
Finding non-fictional examples of well-behaved negroes is not easy, even with the endless attempts to manufacture them during mulatto history month. Outside of the world of sports, where jungle genetics and a propensity toward violence are often an asset rather than a detriment, the entertainment industry is the primary source of "inspiring" tales of negro success. Here the kosher powers that be can prop up the American negro and use their control of the media to bombard us with images of talented 85 I.Q. "stars." At the end of day, however, that full standard deviation in measured intelligence never goes away.

Looks like the "teens" were at it again. The same predictable malfunction that occurs whenever negroes gather in large groups. Whites, of course, should avoid such gatherings at all costs.

About 4:45 p.m., a large group of disruptive teens ran yelling through the mall, which is located at 7601 S. Cicero Ave., according to a mall official.

Back to the state of nature as the veneer of White civilization is stripped away, revealing the content of their character. 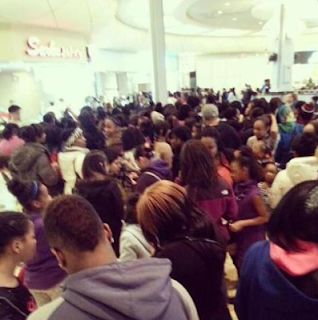 Genetic and cultural outsiders run amok in the U.S.S.A.

Earlier in the afternoon, members of the teen band Mindless Behavior had appeared at the mall food court from 2 p.m. to 4 p.m. to promote their new release, "All Around the World," said John Sarama, the mall's senior general manager.

"Teen band." Will this be the new genre of music that replaces "urban music" as a euphemism for moronic negroes mumbling semi-coherently about guns, gold teeth and defiling White women while god's chosen people count the shekels in the background?

"What would make these youths come here to try and cause this kind of commotion and trouble?" he continued. "I don't know.

It's such an impenetrable mystery. Maybe White racism? Or the legacy of slavery? Pilgrims?

Full Story.
A semitic minstrel show ends with typical negro nonsense. Mindless behavior, violence, destruction and idiocy. If we are going to have any sort of future these creatures need to be removed from White nations, along with the may-hee-can and the wire-pullers behind them. When the collapse comes the mindless behavior will end and the White nation will be born from the ashes.
Chicago Ford City Mall Kosher Music Kosher Sports Mindless Behavior Pathology of the American Negro Rahm Emanuel Rioting Teens The Chicago Plantation