February 01, 2013
The Communist Indoctrination Center, or "college" if you're behind the times, serves almost no beneficial purpose in society. Few useful employment skills are taught. It acts as a high priced day care center where extended adolescence can continue until the loans run out. It creates the next generation of marxists via endless anti-White mind-washing. Sometimes it even creates insane negroes that shoot White women.

Superior Court Judge Kelly A. Lee will hear from experts who evaluated Nkosi Thandiwe Wednesday night to determine if his mental state during the shooting spree was so disturbed that a jury could find him “not guilty by reason of insanity.”

Could this "disturbed" mental state inside an 85 I.Q. brain by the result of kosher programming? Should we start banning kolleges for our own safety? The answer, for both, appears to be "yes."

During his testimony Wednesday, Thandiwe suggested that his reason for even purchasing the gun he used in the shootings was to enforce beliefs he’d developed about white people during his later years as an anthropology major at the University of West Georgia.

The endless "kill Whitey" message found in the university classroom seems to have fallen on fertile soil in this worthless negro scumbag. Who could have guessed that this sort of indoctrination might have real life consequences? Communist drivel led to the death of a White woman at the hands of a brown monster. 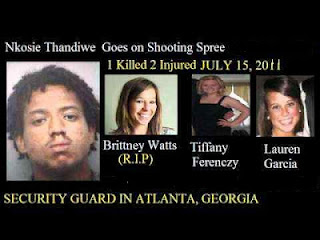 “I was trying to prove a point that Europeans had colonized the world, and as a result of that, we see a lot of evil today,” he said. “In terms of slavery, it was something that needed to be answered for. I was trying to spread the message of making white people mend.”

You certainly raised a valid point. The negro needs to be removed from White nations. Trying to somehow make them into second-rate imitation Whites was misguided, at best. We've paid a heavy price for taking up the White Man's burden, only to see low I.Q. folly bring it all to ruin.

He said the night before the shooting, he attended a so-called “Peace Party” intended to address his concerns about helping the black community find equal footing, but two white people were there.

He even admitted to earlier that day getting angry enough on the job to shoot his supervisor. “What my boss said to me …,” he told the jury, “that rage almost made me pull out my gun on him.”

We are forced, by law, to employee these monsters and give them preference over more qualified Whites. Our reward for this might be a bullet in the back.

When Frankfurt school nonsense intersects with the idiocy so often found in the "African American" the result is predictable disaster. A White woman dead, another left paralyzed. Victims of the kosher genocide, the one-sided, undeclared race war against Whites. Until we regain control of our destiny, this will continue. No more communism, no more "diversity." We need our own homeland.
85 I.Q. average Anti-White Racism Atlanta Brittney Watts Communist Indoctrination Center Lauren Garcia Nkosi Thandiwe Peace Party Tiffany Ferenezy White Man's Burden