February 05, 2013
The popularity of kosher sports is, along with simple cowardice, one of the most powerful forces holding back the advancement of White solidarity. They offer our enemies a chance to push ugly, dangerous simians as heroes fit for a White woman. They channel our nationalistic instincts into something that is not only no threat to the ruling criminals but is actually harmful to those who fall into it. Millions of Whites watch the "big game" but how many will speak out against the planned May-hee-can amnesty, the endless negro crime against Whites, the tax and spend, the spiraling debt, or the cultural marxism? Yes, sports are very useful for our enemies. This, along with the telavivision in general and middle class wage slavery keep Whites from waking up to our planned destruction.

Even in the fantasy world created by the inner party, stupid reality has a way of breaking through. It could be thirty minutes of Chocolate City darkness, illegal dog-fighting, sodomites fighting in public, or boring old home invasion and armed robbery.

Jamone A. Boyd, 18, is accused of participating in a Jan. 23 robbery at gunpoint of several victims in a Kansas City apartment. At least four of the robbery victims identified Boyd, who is 6-foot-4 and 250 pounds, from photos. Boyd turned himself in to Lee’s Summit Police early Sunday afternoon and denied being involved in the robbery.

Boyd, a four-star defensive end who had received interest from Missouri, Kansas, Kansas State and Nebraska among other schools, was also cited in November for municipal offenses of resisting arrest and possessing marijuana.

This savage, criminal animal was considered university material because he played a child's game, when not getting "baked" or brawling with the "five-oh." Whites were hoping and praying that this amazing "four star" monster would attend their kollege and defile their daughters. For the love of a stupid game they wanted this piece of scum to be given a free ride on their dime. 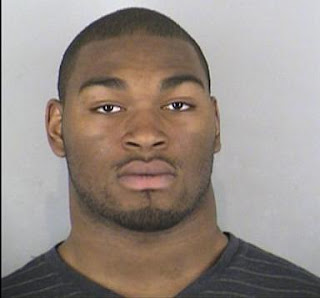 Maybe Sandra Bullshit could adopt this.

Look at the above image for as long as your stomach can handle it and then consider the implications. This genetic alien who appears to almost completely lack frontal lobes was going to get a free ride in higher education. Look at the low sloping forehead, the broad ape-like nose, the brow-ridge, the soulless eyes. Let's give this moronic living fossil free things because it can "tackle" other negroes.

He previously committed to Kansas State but instead opted to attend a community college to improve his grades, Lee’s Summit West football coach Royce Boehm said.

Grades that needed "improving." There's the shock of the century. Start with an 85 I.Q., at best, then lower that even further by getting "baked" regularly. Then send the resulting idiot to a University. This is then madness of today's U.S.S.A.

According to court records, Boyd and four or five other males pushed their way inside an apartment with five people inside. Two victims were struck in the head with a pistol and others were pushed to the floor. When some of the victims tried to barricade themselves in a bedroom, one of the robbers kicked the door in and pointed a gun them.

More crimes committed by "males." This beast and his tar-colored "homies" ran amok. I'm sure they're all aspiring doctors, lawyers, marine biologists, rappers and theoretical mathematicians turning their lives around.

The robbers took cash, electronics and sports-logo clothing, among other things. Police said the robbers warned the victims not to leave the apartment too soon or they would be shot with assault rifles. The robbers allegedly said they did this all the time and would be back in a week or two to rob the victims again.

Let's slip a little subtle gun-grabbing language into this story of negro pathology. Also "we'll be back to rob you again." This has been the motto of the American negro, ever since they figured out they could get free hand-outs from dumb ol' Whitey.

Instead of a dorm room full of White women and a stadium full of worshipful White sheep, this evolutionary throw-back will be entering a cell full of dark-skinned garbage and an exercise yard where guns and clubs are used to keep its savagery in check. It doesn't matter, plenty of similar negroes will manage to meet the very low behavioral standards of modern America and end up on the synagogue in the living room, representing "swaggin' university" and maybe scoring the big "tug." This nonsense happens only because Whites support it. It's time for that support to vanish and for us to start fighting for our own best interests.
85 I.Q. average Armed Robbery Brow Ridge Defensive End James Boyd Jewish Controlled Sports Kansas City Kansas State NFL No Frontal Lobes Royce Boehm Young Males