February 13, 2013
There's nothing easier than being anti-White in today's U.S.S.A. You'll certainly never go broke and can even expect to be hailed as "courageous" and "controversial" for parroting the official line of the marxist wire-pullers. There's nothing more conformist and gutless than going along with this as a White person. Whites are being targeted for destruction within the nations we built. Our enemies are tireless in their attacks.

A lot of the attacks against normal White America originate in the communist echo-chamber that is the American kollege. In these Communist Indoctrination Centers mind-washing is the order of the day, leaving ruined victims with massive kosher debt, no employment skills and a guilt complex over their own existence. This advances the ultimate goal of White genocide.

Consider the "Unfair Project," which we've discussed in the past. After being defeated in Minnesota it looked like this particular cultural marxist arm might disband. This has proven overly optimistic, because like a cancer in remission it has returned, worse than ever.

The University of Wisconsin – Superior (UWS) is sponsoring a campaign that teaches students it is “unfair” to be white, a university spokesperson confirmed to Campus Reform last Wednesday.

It's unfair in the same sense being smart is unfair to morons or being beautiful is unfair to the ugly. Whites are paying money to listen to this drivel. We are funding our own dispossession.

The campaign’s slogan, as it appears on its official website, is “it’s hard to see racism when you’re White.”

Actually it's real easy to see racism when you're White. You see it when you face structural discrimination in employment and education. You see it in the endless anti-White propaganda vomiting out of the moron box. You see it in racially motivated black pack attacks, "polar bear hunting" and "White girl bleed a lot." No, it isn't hard to see.

The campaign was initially sponsored by the University of Minnesota – Duluth (UMD), but the school dropped their partnership and labeled the campaign “divisive” and “alienating” after a Campus Reform investigation brought unwanted national attention to the school. 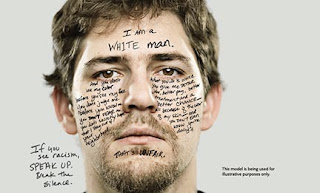 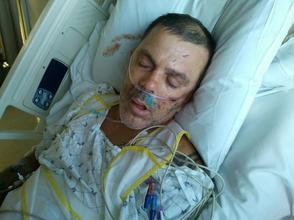 The reality: A White man brutally beaten by a negro mob. Motive: racism.
The school is using the campaign as an “opportunity on our campus to talk about all privilege and to create conversation,” she told Campus Reform.
Let's talk about that "privilege." We pay taxes to support the brown underclass. We are discriminated against, beaten, made the butt of jokes, negroes on the talmudvision call for our destruction and if you notice any of this you're a "racist." This is how it is in the real world, outside the fantasy marxist land kollege professors live in.
Full Story.
More anti-White evil from our enemies. Never has a nation's productive class been so completely vilified and considered to be so expendable. The anti-White racism is so virulent that the criminals that push it can't even see that the logical outcome is Detroit at best or Zimbabwe at worst. We face blind, irrational hate from human dog turds. We must fight it by loving our race and fighting for White Nationalism.
Anti-White Racism Black Pack Attack Blame Whitey Communist Indoctrination Center Cultural Marxism Polar Bear Hunting Unfair Project UW-Superior UWS White Privilege