February 08, 2013
Much of the history of so-called "civil rights" is a history of bullying. Led by jew communists negroes were trained to always be the victim, to cry and whine and march and boycott until the inevitable cowardly White surrender occurred. Even today, where Whites now face structural racism in employment and education while the negro receives every special preference imaginable it still happens. Imaginary White racism is everywhere. The solution is endless, completely baseless litigation. The negro lottery offers a "get rich" scheme for these genetic aliens and is successful an alarming percentage of the time. Meanwhile, hard-working Whites are forced to pay and pay and pay for this failed branch of humanity.

Even Disney, a completely kosher operation that regularly vomits out marxist drivel is not immune from this negro con game.

A San Diego family is suing Disneyland, claiming a theme park character snubbed their kids because they are black.

Jason and Annelia Black of San Diego claimed an actor in a costume for the White Rabbit character from “Alice in Wonderland” ignored their two sons and their cousins, who are black, during a trip in August, but then “showered” affection on a group of white children.

"Dis rabbit be all races and sheet. Where be da black rabbit? Now it done be showerin' dat aff-ec-tion on da honky devils. Where be mah joo lawyer?" I should also point out this incident took place in August 2012. How brave of the negro to silently bear the burden of White rabbit racism for so very long. 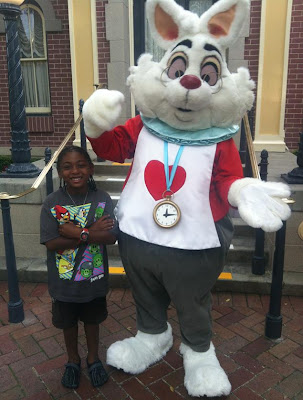 A terrifying look at the evils of racism.

Look at the pained expression on that little negro. This is worth many millions of dollars.

“Regardless of whether the guy in the costume was a racist – I don't know who he is or if he’s white – the way he behaved, he was treating my clients differently,” the family’s attorney, Dan Gilleon, told the Daily News.

The criminals with little caps on the back of their heads spring into action. Here's a chance to make some geld without working for it! Notice the assumption that evil old Whitey is behind this horrific crime. It's always open season on Whites in today's U.S.S.A.

The Black family had visited the park just weeks before the incident and were not ignored by the rabbit, who is their son Jason Jr.’s favorite character, Gilleon said.

It seems pretty plausible that a tertiary character, with "White" in his name, from a movie that came out in 1951, would be the "favorite character" of a six-year-old negro. "Frivolous" doesn't seem like a strong enough word to describe this nonsense. 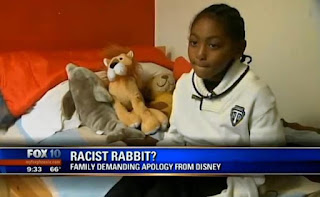 "Now look sad so we can get dat paper."

Jason Black Jr., 6, said he went to hug the character, "but he turned his back."

The horror, the horror.

Now for the big cash-in, as I'm sure Disney will pay out just to make them go away. This is the world we live in, a world of made-up White racism and very real racism aimed at Whites. This story is just another example of the madness the surrounds us on all sides. We need our own nations, free from the endless "victim" minorities that cry out in pain when they hit us.
Annelia Black Blame Whitey Dan Gilleon Denny's Disney Disneyland Frivolous Lawsuits Jason Black Negro Lottery San Diego White Rabbit