March 07, 2013
It's hard for most Whites to fully comprehend the level of jealousy and hatred toward us that exists in the mind of the average negro. This blind, animal hate is then further fueled by the dinosaur media, the marxist educational complex and their own "leaders." The message never changes: "Kill Whitey." Then the inevitable "random" attacks occur and it's the job of the same kosher system that played a major role in provoking them to quickly send them down the memory hole. Here in the U.S.S.A. and in every other White nation the hush crime horror continues as dangerous dark animals are unleashed on us by our criminal, illegitimate governments. Today's story from the United Kaliphate is just another scene in the ongoing genocide targeting Whites.

A 16-year-old girl stabbed to death in a 'random attack' on a double-decker sent a chilling tweet about a man who was 'worrying' her on a bus journey a month earlier, it emerged today.

There was nothing random about this attack. Instead a savage brown creature brutally murdered a beautiful White girl in a racially motivated attack. 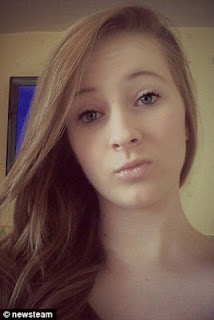 Murdered by a jungle monster released into The West.

A 22-year-old man was arrested a short distance away on suspicion of her murder at 12.20pm, around five hours later, after a huge manhunt was launched.

He was held in Harborne Road during a foot chase after officers spotted a man who fitted the description of the suspect acting 'furtively' at the back of Morrisons.

Let's take a look at the "man" in question. 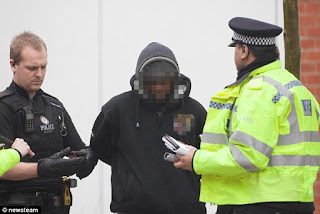 The biological weapon of the nation-wreckers.

It has since emerged that Christina had tweeted her concerns about a man she felt was acting strangely on a bus just weeks before she was killed.

My first thought was "Why wasn't she armed?" but then I remembered this is the United Kaliphate where there's knife control and unarmed defense control and cameras and mosques everywhere and Whites are lambs to the slaughter. All she could do was document her imminent death on the internet. No one came to her aid, no one cared, another casualty of the multi-cult, of the joyous diversity of identical looking and acting living fossils flooding White nations.

"Why can't something go right for once?" She wondered, minutes before being murdered. Good question. Why are we forced to live next to racist, violent creatures? Why are only White countries being flooded with genetic and cultural aliens? Why did we allow this to happen?

The United Kaliphate got a little more ugly today. A beautiful White girl was murdered by an simian turd. This is why I fight for White nationalism. These horrors must stop, we have to restore sanity and civilization. I never want to read a story like this again. We must save our race. No more cowardice, no more good losers. Victory is the only option.
Birmingham Christina Edkins Death of a Nation Europe for Whites Great Britain Immigration Mass Transit Negro Anti-Soul Undeclared Race War United Kaliphate White Nationalism