March 13, 2013
Let's all put on our white wristbands and reflect on another aspect of The Invisible Backpack, the massive White privilege that we all enjoy without even realizing it until a saintly jew points it out. Privileges like paying for the endless negro failure, both in money and blood. Special advantages like being singled out for racist pack attacks. Not to mention being demonized by the dinosaur media, when they're not sending stories of negro and meskin pathology down the memory hole. Yes, we enjoy many special advantages in the kosher U.S.S.A.

Negroes, on the other hand, face "structural racism" and constant injustice. These imagined insults completely excuse their predictable and constant inability to obey the very modest rules of a civilized White nation. Over half a century of wasted money and special rights has changed nothing. If anything, today's negroes are far worse for the folly of thinking we could turn them into good little citizens.

Just like on Monday night, crowds gathered to protest the weekend police-involved shooting of what cops said was an armed 16-year-old boy.

Only in the dinosaur media is a fully mature, extremely dangerous negro male a "boy." A negro criminal's death sparks a protest from 85 I.Q. scum.

The crowd marched down Church Avenue in East Flatbush, to the 67th Precinct. The residents expressed themselves with loud, profanity-laced chants denouncing police practices.

The always classy and reserved nature of the Simian American. These creatures are allowed to vote.

Same old story. A good kid, turning his life around. He was an aspiring rapper, basketball player and/or nuclear physicist. Than the racist, evil "five oh" robbed us of this precious living dog turd.

Speaking about the events of Monday night, the police commissioner said that on the way to the 67th Precinct, some people stole fruit from local markets and threw the fruit and then the disorderly group disrupted a Rite Aid drug store on Church Avenue.

Yeah, speaking of. By the way, the coal-colored "justice" mob has been running amok. Just thought we might mention that. 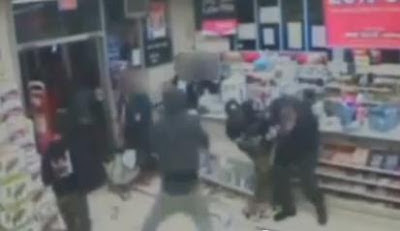 “They trashed the location. They took a man who was a customer. They tried to take the cash register. He tried to stop them. He was hit over the head with a wine bottle,” Kelly said.

If there's one thing the negro is good at, it's "trashing" the "location." Whether that location is the Africa all against all, Detroit black city, or New York the story is always the same. White nations and only White nations are being flooded with these monsters.

That customer, the Rev. Mark King, picked the wrong time to be inside the Rite Aid, as the crowd poured in, trashed the aisles, and then turned their attention to King, pummeling him on the ground.

Sounds like one of those media "mob rob gone wrong." A harmless individual attacked by worthless criminal animals. Yet another reason to be armed.

“He was on the cell phone, so they said, ‘Give me that,’” said Larry Scantlebury, a parishioner at the church where King serves as pastor.

"Gibs me dat." Restorative justice and progressive politics in action.

“I tried to make them stop, but they didn’t want to listen,” she said.

The only thing these dangerous genetic aliens will listen to is a gun.

A nation can't survive when it's half "protected" victim groups and half White tax-paying suckers. The coming collapse is almost inevitable, even if we actually implemented sane laws tomorrow, which isn't going to happen. The only question that remains is what will replace the U.S.S.A. after its death and burial. My humble suggestion is a White Nation.
85 I.Q. average Aspiring Rapper Black Pack Attack Brooklyn Church Avenue East Flatbush Kimani Gray Mob Rob Negro Gangs Pathology of the American Negro Rite Aid Robbery Gone Wrong