April 25, 2013
The races are not equal. The fact that Europe produced the Renaissance, the Enlightenment and the Modern Era while Africa produced mud huts, witchcraft and slavery is not some crazy coincidence. The negro mind is very different from the White mind and as a result their culture and society are very different as well as being completely incompatible with White civilization.

Whites typically have few children and put considerable resources into raising them. The negro typically has many children and puts very little effort into raising them. After all, that's what the magic government, the hand-outs from the White tax-paying sucker and public skools are for. The result of this "diversity" in the realm of child-rearing is that it's beginning to become common to see nine and ten year-old negroes committing crimes of violence. Whites are the target.

A 38-year-old woman was in the area of Fifth Ave. and East 107th Street when she was approached by a girl demanding her cell phone. When the woman refused, a second child grabbed her pocketbook, but was unable to pull it away.

Attacked by wild negroes. These are the children of Barry Soetoro. In today's U.S.S.A. the negro begins committing idiotic and senseless crimes almost as soon as it starts walking upright.

The children and a third person ran off.  Surveillance photos of the trio were released on Thursday.

Luckily we have the usual high quality footage to document society's collapse. 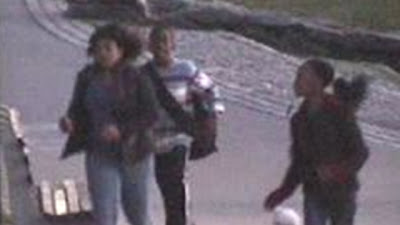 Why is this garbage in White nations?

A "robbery gone wrong" at age ten. In a few years this worthless animal will be raping and murdering. We are forced to live with this failed race.

The marxist goal of a huge, dependent underclass that will gladly vote for tyranny has been achieved. The ultimate aim is an entire society of moronic, easily-ruled brown slaves. White people are the only threat to achieving this and as such we are being targeted for genocide. We need to wake up and fight for our own interests and nations. No more negro pathology.
Feral Negroes Fifth Avenue New York Not Equal Obama Girls Obama's Sons Pathology of the American Negro Pre-Teens Robbery Gone Wrong Teens Think of the Children Welfare State