April 29, 2013
The 85 I.Q. negro and the filthy may-hee-can welfare colonist represent the future of the U.S.S.A. Just ask any mainstream politician from either party. We just have to figure out how to tap into the amazing resources represented by these brown aliens, to somehow alchemize these outsiders into good little citizens. This is the promise of the public school, where White do-gooders vainly battle against genetic determinism. Despite efforts to win non-White goodwill be focusing classes on how everything "be races" and the apocryphal historical achievements of the negro and la-teen-oh the classrooms resemble a sort of Detroit in miniature, with the brown kids preparing for a life of dysfunction.

A parent gave KPIX 5 the video of the brawl, captured on a cellphone before Winter break. The video shows punching and kicking between the student and teacher, followed by the teacher picking up a desk, thrusting it at the child. The student involved in the video no longer attends the school.

A negro attacks a White teacher, who is forced to fend off the feral monster by using a desk, lion-tamer style. Watch the video. This is ordinary behavior from the Obama girls. 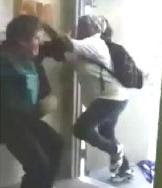 “You get in a cycle where you’re constantly placing new teachers, those teachers leave after a couple of years,” said district spokesperson Troy Flint. “And it creates a lack of stability at the school. And I think that is something that undermines academic progress to a certain extent.”

There are limits to what a White do-gooder will tolerate. After seeing the content of their character up close, seeing the low I.Q., the culture of idiocy and violence, realizing you can't transform a negro into a White person, what's left? Because Whitey refuses to stick it out and absorb endless abuse, little Barkevious can't read, according to Troy Flint, anyway.

The middle school is one of the toughest in East Oakland, with 360 students ages 10-13. Police have visited the campus 13 times during the school year so far, and five students have been expelled.

Pre-teen savages that are already completely wild. Diversity, it's such a strength.

The fight that was caught on video took place a few months ago. Meanwhile, the school is not denying a more recent event. A student told KPIX 5 that his classmates started what he called a “riot” in a classroom.

“They destroyed the whole classroom. They broke the desk. They threw the computers on the floor,” Barajas recalled. He said he hid under a desk, when other students tossed desks and other items across the room.

A sneaky little meskin hides while negroes run amok. The future of this great nation. In a few years these same animals will be rioting in the streets, attacking Whites, committing crimes. The cycle of predictable, genetically determined failure repeats itself. No one learns anything.

The only solution is a nation for Whites. The endless wasteful attempt to instill basic civility in the lower races has only resulted in failure and misery. Today's negro is far worse, if anything. These alien elements need to be removed. We must restore our people and build our own nations. The alternative is a dark future.
85 I.Q. average Alchemizing Negroes into Whites Meskins Oakland Obama Girls Pathology of the American Negro Pre-Teens Public School Rioting Teens We're Not Equal