April 09, 2013
Conservatives are losers. Look at their platform from twenty years ago and ask yourself if there's even one issue where they weren't completely defeated, from free association, to protecting the family, to the sodomite agenda, to small government and controlling spending, to protecting our borders, culture and heritage. It's just one defeat after another. Instead of a force for positive change they are merely the long shadow trailing after tyranny. Whatever the marxist argues for today the conservative will agree with in a decade or so. These are our current voting options: fast decline or moderate decline.

Cattle control, the disarming of Whites, is one of the few areas where the paycheck, careerist conservative can at least point to something that isn't total unmitigated disaster and defeat. This is mostly because of popular outrage. Even so, the endless war against our inherent rights continues. Now the H.N.I.C., the same man who uses dead children as props for the communist agenda, accuses the Loser Party of not simply lying down and dying on a hot button issue, for once.

At a critical moment for hopes for sweeping action to stem gun violence, Obama traveled to Hartford, Connecticut, not far from Sandy Hook Elementary School, where 20 children and six adults were gunned down in December.

The same tired narrative, the same highly suspicious useful crisis trotted out one more time in a desperate final bid to disarm the goyim. We can make everything safer by disarming law-abiding Whites. Even the average American, not exactly famous for critical thinking, isn't buy this pack of lies. 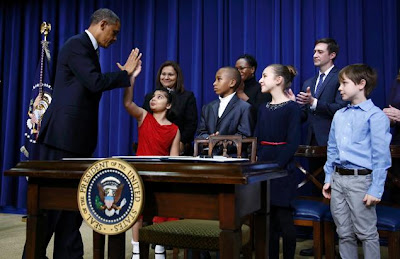 "Some folks in Washington are already floating the idea that they may use political stunts to prevent votes on any of these reforms," Obama told a raucous crowd during his second gun control rally in a week.

Crazy stunts like "the will of the majority" and "constitutional protections" and "inherent rights endowed by our Creator." As opposed to hiding behind children while stripping away rights by personal fiat, which is how a representative government is supposed to work, right? The re-election of this lying, hypocritical, narcissistic, drug abusing, communist, racist Chicago pimp is proof that we're doomed as a nation.

"What's more important to you -- our children or an A grade from the gun lobby?"

Won't someone please think of the children! By the way kid, you're going to inherent a 16 trillion dollar sin debt, no jobs, cities devastated by negro and meskin pathology, open borders, vanishing rights, and systematic anti-White discrimination. Assuming you're not stabbed to death with scissors while still in the womb. But hey, at least you'll be defenseless! 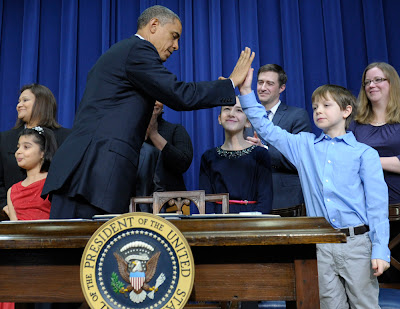 "Your national sin debt share is $60,000. Also you'll be discriminated against because you're White."

Obama has been delivered increasingly emotive calls for action -- surrounded by gun violence victims and police officers to build pressure on Republicans to relent.

When there is no logical argument this is all that remains. Endless appeals to emotion. Dry tears and sad face. Empty speeches read off an electronic screen. Forward.

Based on the track record of the Loser Party we can expect them to eventually lose this battle as well, which is why you should make sure you're armed and prepared. The full collapse is coming soon, with devastating socialist programs just around the corner, combined with massive third world immigration and the final pathetic attacks on the rights of White Americans. When it finally falls, we will build a nation of our own.
Children as Props Communism Death of a Nation Gun Control Gun Grabbers Illegal Immigration Inherent Rights No Future For White Children Obama Sin Debt Think of the Children