April 24, 2013
In the U.S.S.A. two moderate muslims were able to paralyze a city of seven million. Terrified of the mainstream jihadans we gladly surrendered our rights. Now there is a call to stop followers of the false prophet from immigrating into Amerika. Obviously, this will then become a "teachable moment" for the kosher wire-pullers, to play both sides against each other and continue to advance the cultural marxist agenda. In the United Kaliphate the opposition to islamization is long defeated and each day new depths of dhimmitude are reached.

The undercover investigation proves what has long been suspected: namely, that Sharia courts, which operate in mosques and houses across Britain, routinely issue rulings on domestic and marital issues according to Islamic Sharia law that are at odds with British law. Although Sharia rulings are not legally binding, those subject to the rulings often feel obliged to obey them as a matter of religious belief, or because of pressure from family and community members to do so.

Isn't diversity wonderful? An entire nation within a nation, complete with its own laws and courts. With Londonistan now majority non-White and the brown invasion continuing it's just a matter of time before these courts gain full legal authority. It's also only a matter of time before non-muslims are brought before them. "We are a secular, modern, diverse society," says the feckless British atheist. Meanwhile, islam conquers your lands without firing a single shot.

In another case, a Muslim convert from Bristol named Cara contacted the Leyton Sharia Council for a divorce. Cara, who met her husband at university, had been persuaded to have only a Sharia marriage. After the wedding, she was abused by her husband, who allegedly controlled her by taking all of her earnings. After he brought prostitutes to their home, Cara ran away to a shelter.

The Religion of Peace. We need this nonsense to flood into all White nations. Europe can't be allowed to stay White and Christian, that is evil. The chosen people have spoken: a flood of cultural and religious aliens for White countries, retaining the "jewish character" of Israel.

Hasan suggested that she ask herself if the violence was due to her own actions, then urged her to redouble her efforts to be a good wife by cooking and cleaning for her husband.

Jewish feminism: a genocidal mental illness intended for Whites only.

The BBC also filmed proceedings at Sharia Council of Dewsbury, a city in West Yorkshire that is a magnet for Muslim immigration. (Islamists have promised to turn Dewsbury into an independent Islamic state ruled by Sharia law, and entirely apart from British jurisprudence.)

Who will stop them? The criminal, illegitimate government that unleashed them? The feckless, beaten down, "secular," alienated Britainistan Whites? The light of the world behind much of it?

The Leyton Sharia Council -- the oldest Islamic council in Britain and one of the most active in the country -- is also hoping to draw a line in the sand: to establish the full recognition of Islamic Sharia law. 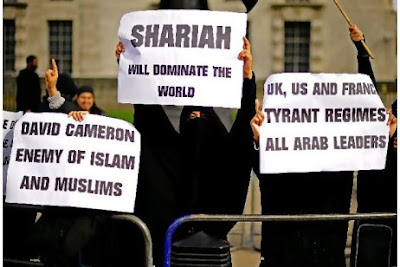 A tiny island nation is expected to bring in jihadans with no interest in assimilation. The result is that they form their own nation within the White host and, like the parasite they are, eventually take over. The host dies in the process, which is ultimately bad for the parasite, too, but the average marxist is not noted for their foresight or ability to understand how cause and effect work in the real world. The White nations are being intentionally destroyed.

White Nationalism and racial self-determination is the only answer. We must have our own nations if we're going to survive as a people. The alternative is being ruled over by aliens and then genocide.
Death of a Nation Dhimmitude Feminism Great Britain Immigration Islam Leyton Sharia Council Muslims Religion of Peace Rivers of Blood Sharia Courts United Kaliphate