April 10, 2013
If there's one message delivered by the media, the educational system and our criminal government, other than "White man bad" of course, it's "miscegenate." White women are constantly encouraged by the nation wreckers, cultural marxists and kosher criminals to give themselves to genetic aliens, knowing full well what the end result of that abomination will be White genocide, whether through being replaced by "brown everyman" children or simply being murdered by the negro male. Either way the agenda of our enemies is advanced. We must protect White woman from being sacrificed on the altar of "diversity."

The autopsy shows 33-year-old Melinda McCormick was brutally beaten with three different weapons, and then her home was set on fire. This weekend, three people were arrested for McCormick's death. Gregory Williams, Keisha Pugh, and Anthony Pressley are all charged with first degree murder and armed robbery.

Hush crime horror, a White woman slaughtered by brown animals. Silence from the dinosaur media. We can't have White women waking up to the dangers of bringing "Leroy" home.

These worthless living fossils were unleashed on Whites.

The suspects are now in the Escambia County Jail on no bond. The sheriff says the autopsy pictures are the worst he has ever seen. Investigators say Melinda McCormick let the suspects inside her home because she knew all three of them. Gregory Williams was her boyfriend, but she had no idea what they had planned.

"Hey, White women! Wouldn't it be cool to date a hip, soulful "African American" instead of a stiff, nerdy and awkward White man? Sure, they're seven times more likely to commit crimes of violence, ten times more likely to have HIV and they have an almost incomprehensible hatred for all Whites, but still it would be cool. You'd be just like those glamorous women on the electronic synagogue! You don't want to be a racist, do you?"

The end result: the worst autopsy pictures a sheriff had ever seen. 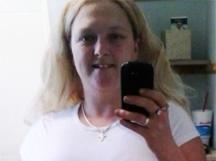 Went black, is not coming back.

Investigators say her neighbor, Melinda McCormick was beaten by a hammer, crow bar and a lead pipe, and then the suspects set her sheets on fire to try and destroy the body, but left the hammer behind.

The real life negro acts a little differently than the ones on the moron box.

State Attorney, Bill Eddins, also says it was fueled by hate. One of the suspects says he did it because he hated white people.

There's the surprise of century. White hating negroes are loose in our nations. Pretending these creatures are our equals and can somehow be alchemized into good citizens is the great delusion of this age.

They also told deputies McCormick was begging them to stop.

The negro anti-soul. For the last sixty years Whites have been begging the negro stop with hand-outs, preferences, special programs and countless lost lives. This is what we have to show for it. The content of their character.

White women need to be warned about the dangers of being around, let alone becoming intimate with, 85 I.Q. simians that openly admit to hating Whites. The doctors, lawyers and Will Smiths of the telavivision do not in any way represent the truth. The criminals in this story are much more representative of the mind set and behavior of the average American negro. Be armed, avoid areas where they congregate and warn others. We are responsible for our own survival.
Anthony Pressley Crow Bar Gregory Williams Hammer Keisha Pugh Lead Pipe Melinda McCormick Memory Hole Negro Anti-Soul Race Mixer Misery Real Hate Crime