November 15, 2013
The negro is never responsible for its own failure. It's "races" police, lack of opportunity, evil Whitey, pilgrims, the legacy of slavery, wicked Whitey, a "races" justice system, bad Whitey, etc. The result of this permissive "we can't hold you to the standards of civilization, you're a negro" attitude is the worst pathology imaginable. Combined with an eroding rule of law and a nation in decline, it's a recipe for disaster. It's a recipe for criminal simians pointing guns at babies.

22-year-old Ashanti Hendricks, the man involved in yesterday's shooting at Children's Hospital, has been moved to the Milwaukee County Jail.

Don't worry Whitey, the bill for all of this is already on the way.

Milwaukee police shot Hendricks at Children's Hospital of Wisconsin while trying to arrest him around 11:57 a.m.

The police are getting a lot of heat for this. Suffice it to say, almost no one in the dinosaur media is blaming the dark animal that made the shooting necessary. The negro simply has no place in a White nation. They fail to live up to even the most modest of behavioral standards with alarming frequency.

She informed police Hendricks has a warrant out for his arrest and he may be armed. We're told the warrant was for felony possession of a firearm.

Gun laws are so very effective in controlling 85 I.Q. criminals.

Sheriff Clarke says the suspect was holding a baby when MPD officers found Hendricks. Officers notified him he was being arrested. Hendricks put down the baby, and initially gave the impression he'd be cooperative. Chief Flynn could not confirm the nature of the relationship between Hendricks and the infant he was holding when officers found him.

A negro using a baby as a human shield? Wouldn't surprise me. 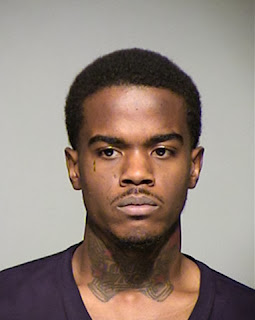 The animal involved.
We're told the Hendricks pointed his .40 caliber glock at the officers a couple times while running away. Chief Flynn says his officers fired shots and wounded the same arm he used to hold up the gun.

It seems the officers were more worried with preventing the inevitable "races" police lawsuit than stopping this simian. Aim for the center mass next time.

Hendricks continued his attempt to escape from police officers after being shot in the arm. After a short struggle officers were able to get Hendricks handcuffed.

Now we can pay to feed and house this piece of garbage, before its early release to cause further damage to an already critically injured nation.
85 I.Q. average Ashanti Hendricks Children's Hospital of Wisconsin David Clarke Ed Flynn Gun Control Milwaukee Pathology of the American Negro Wisconsin