December 26, 2013
Every day might as well be Christmas for the non-Whites living in formerly White nations. We are the great gift-giver bringing civilization, order and peace to the brown mass, at least to the extent that their inherent genetic limitations allows it. We give them the hand-outs, the set asides, the special treatment. The reward for this generosity is barely concealed hatred born out of jealousy and the endless chorus of "More needs to be done!" It never ends, the goal is White genocide.

A man dressed as Santa was struck by a pellet gun while delivering toys in Southeast D.C. on Christmas Eve, police say.

Negro Claus shot in the D.C. all against all.

The man was attending a toy giveaway in 1200 block of Stevens Road SE in the Barry Farm neighborhood shortly before 9:15 a.m. when he suddenly felt a sharp pain in his back. Police and EMS units responded to the scene.

Many Whites have felt similar pains in the back. It's the strain from having to carry around the dead weight of negroes, may-hee-cans, and the kosher nation-wreckers. 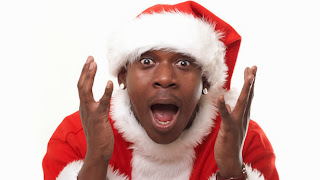 The victim was taken to the hospital with non-life-threatening injuries. Police have not released his identity and are investigating the incident as an assault.

Another Christmas come and gone, mostly obscured by the media's current obsession with Sodomites. 2014 will be here very soon. Will the rot finally reach a critical mass? Will Whites start to wake up? It's up to all of us.
85 I.Q. average Christmas Pathology of the American Negro Santa Senseless Non-White Crime Shooting Toy Giveaway Washington D.C.