July 03, 2014
National vision. Rule of law. Shared values. Borders. This is Old America, also known as White America, a nation that quietly ceased to exist as the marxist jews conquered it from within without firing a single shot. It was a replaced with the U.S.S.A., a nation that injected the poisons of materialism, sodomy, feminism, equality and spiritual sickness until it died. All that remains is the full collapse, the day the EBT card is scanned and an error message about insufficient funds pops up, the day that a foreign army crosses our open border, the day when the jew realizes that the golem it created is out of control and they flee like rats from a sinking ship.

Meanwhile, many Whites are not only in denial about the passing of the United Soviet States of America, but actually believe that White America still exists, or at worst could be successfully brought back if we just elect the correct kosher-approved ruling criminals. Within the rump state where White values are still given lip-service and the "diversity" remains safely at arm's length this delusion can take root. The result is flag-waving, talk of impeachment and birth certificates, concern over the massive vote fraud, referendums that are simply declared void by jew judges and sometimes the rare display of unity in the face of the nation-wrecking forces allied against us.

Such was the case in California, where White America managed one final gasp.

A crowd of 300 angry protestors forced three buses carrying 140 undocumented migrant children and their parents to turn around in Murrieta, California, on Tuesday after they blocked the road.

A modern day Alamo. A handful of citizens who think the laws of the land should still be enforced, who think that national borders should still mean something, opposed by jew billionaires, elected criminals and the entire communist apparatus. They blocked the road.

The dramatic confrontation between the flag waving protestors and the Homeland Security buses came one day after Mayor Alan Long urged residents to resist the federal government's plan to transfer the Central American migrants to California to ease overcrowding of facilities along the Texas-Mexico border.

Fresh shit straight from the Latin American anus, make room, make room. The foreign invasion has already succeeded, the demographic shift will occur, but our enemies continue to shoot the dead body.

Holding up banners that said 'Return to Sender' and suggesting the children should be sent to the White House instead, the irate protestors succeeded when the buses turned around and headed to a customs and border facility in San Diego - within sight of Mexico.

Two steps forward, one back. The jew communist knows they only have to win once.

It was the first flight planned for California under the federal government's effort to ease the crunch in the Rio Grande Valley and deal with the flood of Central American children and families fleeing to the United States.

This unbelievable treason by a government run amok has been largely accepted by careerists and "g*d wants us surrounded by brown filth" do-gooders. The flag wavers fight it, but have no idea who the actual enemy is. "Must be them gol' durn lie-brals. If we'd only vote for the Loser Party I'm sure this would stop."

Many of the immigrants were detained while escaping violence and extortion from gangs in Guatemala, El Salvador and Honduras.

Please ignore the fact that this sentence makes zero sense and this entire "crisis" was carefully planned by the nation-wreckers. 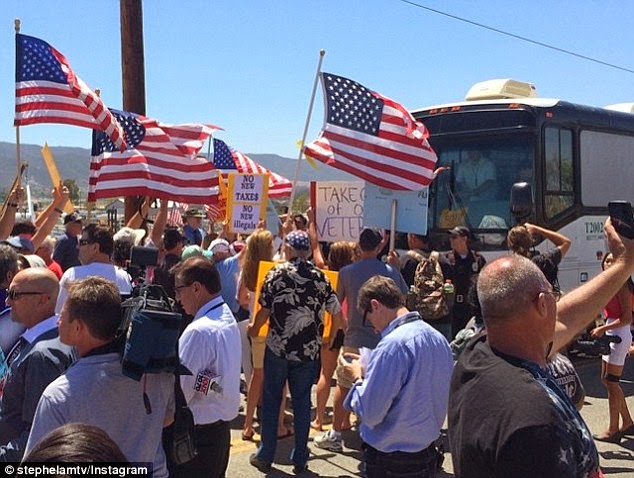 We'll defeat the George Soros billions by waving the flag of a nation that doesn't exist!

The government is also planning to fly migrants to Texas cities and another site in California, and has already taken some migrants to Arizona.

All of this will happen. This protest achieved nothing. We must accept that America is gone and begin working on replacing it. A White nation is the only solution.

More than 52,000 unaccompanied children have been detained after crossing the Texas-Mexico border since October in what President Barack Obama has called a humanitarian crisis.

"It's the right thing to do! More needs to be done!" Zombie America gets shot right between the eyes.

The demonstrators disregarded orders shouted by local police to disperse, but officers did not attempt to intervene physically to break up the demonstration.

Opening fire on peaceful protestors is the next logical step, but we're not quite there yet.

A board member of the union representing border patrol agents, Chris Harris, said the buses would likely be rerouted to one of six other Border Patrol stations in the San Diego sector.

Many of the migrants are under the impression that they will receive leniency from US authorities.

This is the correct impression, just replace "leniency" with "total and pathetic capitulation."

However, Long said that by sending the migrants to Murrieta the federal government is not enforcing immigration laws.

'I wanted to say that I as an American citizen do not approve of this human disaster that the government has created,' Cotton said to the LA Times.

We're not going to "Democracy" our way out of this mess, sorry.

'Who’s going to pay for them?' he asked. 'What kind of criminality will happen?'

The answers are "White tax-paying suckers" and "a lot."

'The Democrats are making it easy for them to come here so they can produce more Democratic voters.'

Because the Loser Party is our faithful and mighty ally. 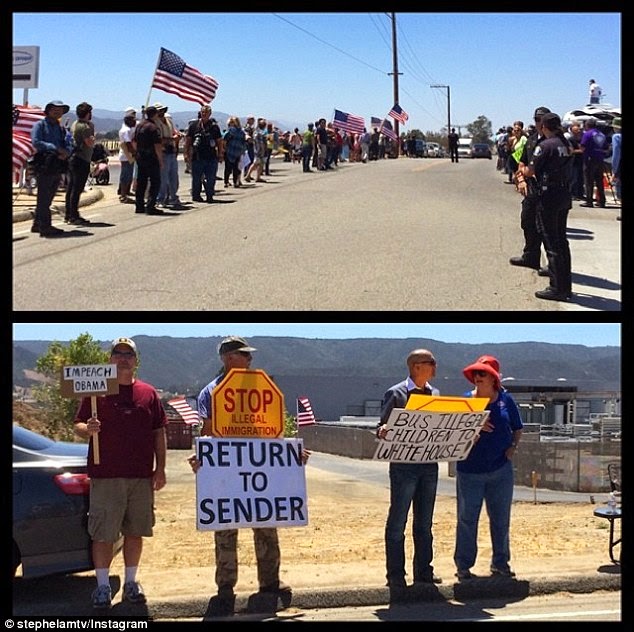