My Mom the Racist, The Gentleman in the Mask

August 21, 2014
What else can be said about the Missouri dress rehearsal for our national collapse? We've seen the content of their character, we've discussed the negro failure. So let's take a look at the character of debased Whites, one a kollege mind-rape victim, the other a careerist scumbag. Here's two forgotten stories from a dying nation, two glimpses into the rot that is consuming everything. First up we have a communist true-believer that took friendly fire from the dark aliens. What lesson did he learn from the racially motivated attack? Answer: Whites are bad. 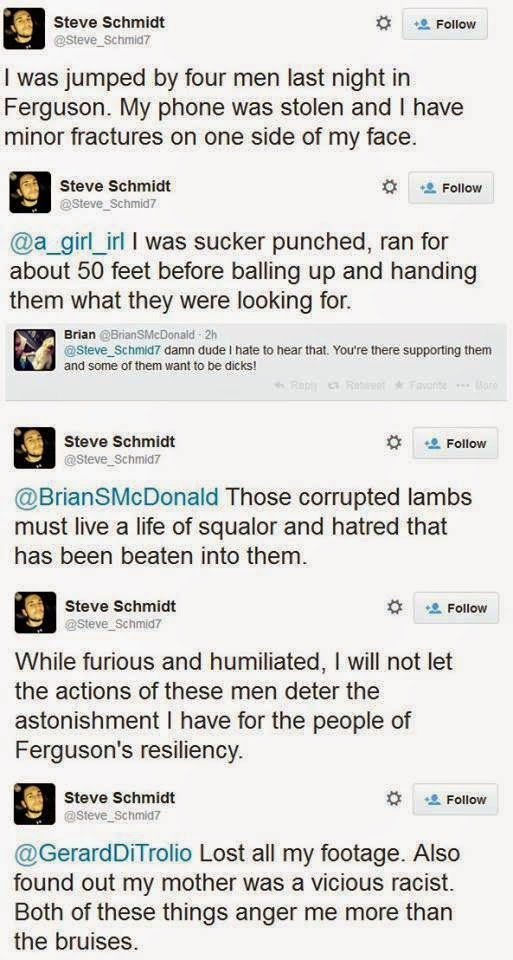 An idiotic marxist is beaten by the "corrupted lambs" in a robbery gone wrong. Amazing resiliency is demonstrated by "running the pockets" of a deluded fool. No lessons are learned and Mommy is "races." Please die, U.S.S.A.

Next up, here's an amazing video of "folks" throwing rocks at the dinosaur media.

Animal noises. Rocks. "Folks" wearing masks. A reporter trying to have a Jane Goodall-style dialogue with the rioters. A nation is laid to rest. "Tell the truth!" shouts a genetic alien. All right, here it is. The negro is not compatible with a civilized White nation. The solution is their removal. Fifty-plus years of pandering, hand-outs and disgraceful, cowardly negro appeasement and this is what we get in return. We need a White nation.
Anti-Racism Black Pack Attack Chris Hayes Communism Cultural Marxism Death of a Nation Ferguson Let Me Run Your Pockets Bitch Missouri Steve Schmidt Stoned Twitter Undeclared Race War