August 04, 2014
White countries must be flooded with alien elements in order to survive, says the jew. Whites must learn to be "multi-cultural," meaning we must embrace our own displacement and destruction. This fundamental transformation of the West from a homogenous White civilization into a brown all against all has been carefully planned by our enemy. It's no accident that Sweden is now the land of muslim rape and riots. Question this disastrous policy and you'll be imprisoned. Another White nation dies.

Tonight the immigrant population in Stockholm's suburb of Rinkeby was awoken by riots. Around 200 people took part in throwing stones at the police, cars were set on fire and shoots were fired.

Brown aliens and their death cult show their gratitude for Swedish generosity. They let this dog shit in, gave them every benefit and preference imaginable, requested no assimilation whatsoever. Here is the reward. Middle Eastern pathology in Scandinavia.

Police received the first alarm shortly before 11pm on Wednesday night. A car had been set on fire.

When police arrived to the area they were met by stone-throwers, prompting them to retreat and wait for reinforcements in order to go back into the war-like zone again.

How would their Viking ancestors have handled this "war-like zone" of dark inferiors? Today's Swede is so feckless that stone-throwing animals caused another disgraceful retreat. Run Whitey, run for your life. Don't resist the rot, it's the wrong thing to do.

The police do not know what caused the unrest.

Moronic brown mass riots for no discernible reason. Police are helpless. We need more alien invaders, that will fix this mess.

The police have been forced to retreat and call for reinforcements. When they got back the crowd prepared themselves with stones and went on the attack again,' says Peter Hered.

"Please stop, Moe Ham Head!" followed by being pelted with rocks. The jew unleashed this. 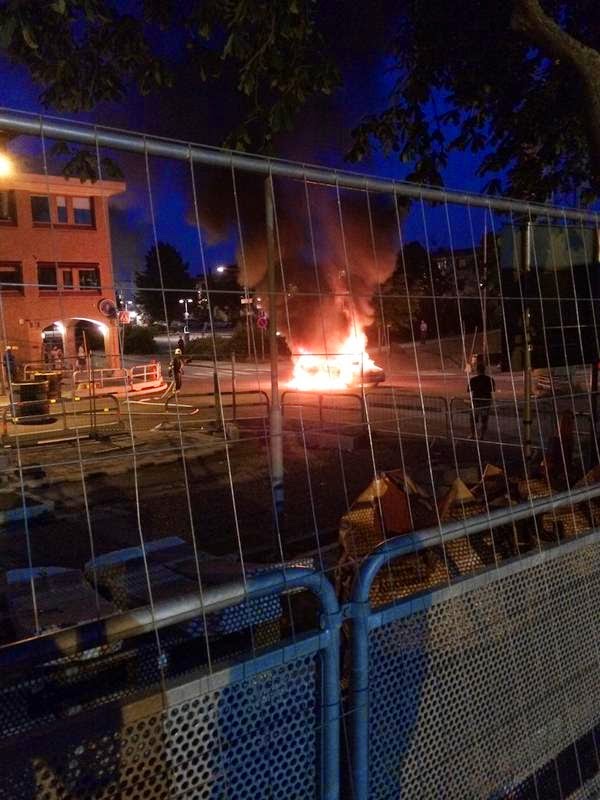 During the night, a helicopter was depoloyed. One person was arrested, but several hundred are suspected.

Out of hundreds of rioting savages they arrested one. Sweden is literally incapable of defending itself from the dark horde it welcomed with open arms.

Another pathetic scene from the death of the West. Will we reclaim the courage of our ancestors and throw out the rot, or is the future a slave collar, a bar code on your forehead, your daughter raped by a brown pack, your son a sodomite? Which way, Europe? White genocide or the restoration of our lands?
Cars Burning Death of a Nation Foreign Invasion Islam Jews Kosher Con Game Religion of Peace Rinkeby Rioting Stockholm Sweden Wonders of Diversity