September 29, 2014
We're still waiting for that honest discussion on race. Bring the I.Q. charts and the crime graphs and all the rest. Look at the skull shape. Compare the heights of European civilization with the African and Latin American sewer. Discuss the jewish role is destroying White nations. It's not going to happen. As far as our criminal government and dinosaur media is concerned "White man bad" is a deep enough analysis of the coming demographic collapse, when they even deign to address the racial disaster area our nation has become. An undeclared and completely one-sided race war is raging in our dead nation. This is all according to the jewish plan. Keep burying the crimes and horrors, keep telling easily refuted lies. As the U.S.S.A. is devoured by genetic aliens and their predictable dysfunction this is the death rattle.

Police say a shooting on ISU’s campus Saturday evening is believed to be an isolated incident.

Go back to sleep Whitey, nothing to see here. Just an "isolated incident" that is in no way typical of negro behavior. Hey, isn't there some Africa Ball on right now? Does anyone still believe this drivel?

A 20-year-old white, male student reported that he was shot in a stairwell at Lincoln Quad around 6:30 p.m.

Walking up or down stairs gone wrong.

Police are searching for a black male in his mid-20’s wearing a white polo shirt.

Officials say the campus never went on full lockdown, but they did close an entrance to the dorm.

As we surrender our remaining rights and the cold remains of our country becomes a coast-to-coast prison, we'll be hearing a lot more of this sort of language. Lock it down. Back in your cells, slaves. The land of the free.

Police believe the victim and suspect know each other in some capacity and the victim was the one and only target.

Get to know negroes, Whitey! Prove you're not "races" and try to befriend dangerous genetic aliens. It will enrich your life. 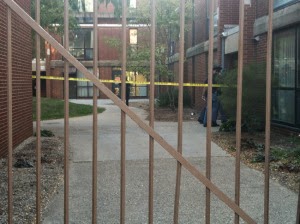