September 30, 2014
The negro can never be held accountable for its failure. The idiocy, violence, laziness, promiscuity and perversion that typifies this failed branch of humanity is clearly the result of evil Whitey. Punishing the negro is "races." This is the latest stage of our national collapse. Our criminal government is afraid to arrest the rot, so all that remains is pathetic groveling, as witnessed in Missouri. Expect to start hearing things like "we could never arrest all these negroes" and calls for "prison amnesty" very soon. All in the name of appeasing an evolutionary dead end. In a sane White nation these genetic aliens would be removed.

Fright Fest lived up to its name not because of how scary it was inside the Six Flags amusement Park in Largo, but because of what happened out in the parking lot.

A night of negro horror worse than any goofy zombie movie. The night of the living negroes. The shambling, animated corpse of the U.S.S.A. awaits the bullet in the brain fired from the gun of jew-promoted "diversity."

Three teenagers were injured and there was a traffic nightmare outside Six Flags as police were arriving and parents frantically tried to reunite with their children.

A scene from the third world. African America.

As a result the park increased security Sunday night.

Tyranny against anarchy. A police state battles the predictable behavior of the American negro.

Katrina Walker was at the park to pick up her son, Caleb, who had been celebrating his 15th birthday. But that celebration she said, ended in chaos: "I heard one or two gunshots, maybe three gun shots. I heard it. They came, all the police cars."

We pretended they were equal. If the White race survives our descendants will shake their heads in amazement at our appalling ignorance.

Walker says kids ran out of the park saying there was also a stabbing, but police will not confirm that report.

"If we just don't report the negro crime it will be like it never happened!" The future of police work in the U.S.S.A.

On social media people posted videos of the scene. One shows a girl lying on the ground unconscious.

It looked like several brown blobs to my eyes.

Dianne McNair who witnessed the scene said that: "the young lady who got knocked out. I saw her go down and I heard someone say she got knocked out and she was unconscious. My grandson and his two friends were in the park. And if this is going on outside what in the world is going on inside?"

What is going on inside? A criminal government controlled by the jew, planning White genocide. Open borders. Cities annexed by Africa. Vanishing rule of law. Chaos. 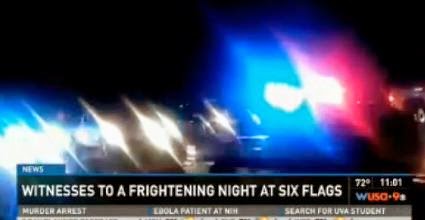 The usual high quality footage of the strength of diversity.

The unacceptable behavior and events that occurred yesterday, acted out by some unsupervised youth, are in no way typical behavior for our park or the surrounding area.

Those crazy "unsupervised youth" and their wacky antics. It's hard to think of behaviors that are more typical of "youths" than this sort of incident.

The safety of our guests is our number one priority and while this was an isolated incident, we are taking steps to make sure it cannot be repeated.

It's funny how these "isolated incidents" occur with clockwork regularity.

"This park has a zero tolerance for inappropriate behavior," said Rick Howarth, Park President. "We will not allow any individuals or groups to disrupt the typical atmosphere of fun and enjoyment found here."

We failed to control the black pack attacks, but here's some worthless tough talk. Maybe use some prison language about "lock downs" and the like, that always plays well with Sally Soccermom.

Walker doesn't blame the park, but doesn't plan on sending her son back: "it wasn't their fault, however I won't be letting my son go back there at all."

Police say no one has been arrested but they are still investigating what happened.

Brown animals put an amusement park "on tilt." Not a single one of these monsters will be punished. No "races" justice system or "over-crowded" prison, just apathy and surrender. For fear of the negro. For fear of the jew.
Annexed By Africa Black Pack Attack Isolated Incident Largo Maryland No Arrests Were Made Police State Rick Howarth Six Flags Teens Youths Zero Tolerance