September 24, 2014
Twenty years ago it was easy to be asleep. Every media outlet was completely controlled by Big jew. We were fed a steady diet of lies and there was no where to go to get the truth. Today the Whites that are still in the kosher coma are choosing to stay in it, deciding that careerism or do-gooder delusion is preferable to admitting obvious racial realities.  The internet has exploded the jewish con game, telling the truth about negro pathology, the la-teen-oh invasion and the Frankfurt school communist.

Even the dinosaur media is forced to scale back the propaganda as they're now constantly called out on their deceptions by citizen journalists. In the NFL, one of the most powerful forces anesthetizing Whites, the content of their character is now coming out. There no longer is any excuse for not wakening up to White racial interests. We've seen the content of their character and it's rotten to the core.

Police say Arizona Cardinals running back Jonathan Dwyer broke his wife's nose with a head-butt during an argument that began after she learned about his recent phone contact with another woman.

The rich and amazing life of a negro animal worshiped by pathetic debased Whites. It slammed its heavily sloped forehead into its racial grab bag wife after getting caught "concubining."

The arrest came at a time when the NFL and Commissioner Roger Goodell are under fire over a series of violent off-the-field encounters involving some marquee players, including Ray Rice, Adrian Peterson and Greg Hardy.

A series of typical negro incidents, exceptional only because these criminal scumbags are the subject of White idolatry.

Dwyer is charged with aggravated assault, misdemeanor assault, disorderly conduct, criminal damage and preventing the use of a telephone during an emergency.

Don't expect this simian to do any serious prison time. After all, it's a hero and role model, according to the electronic synagogue. 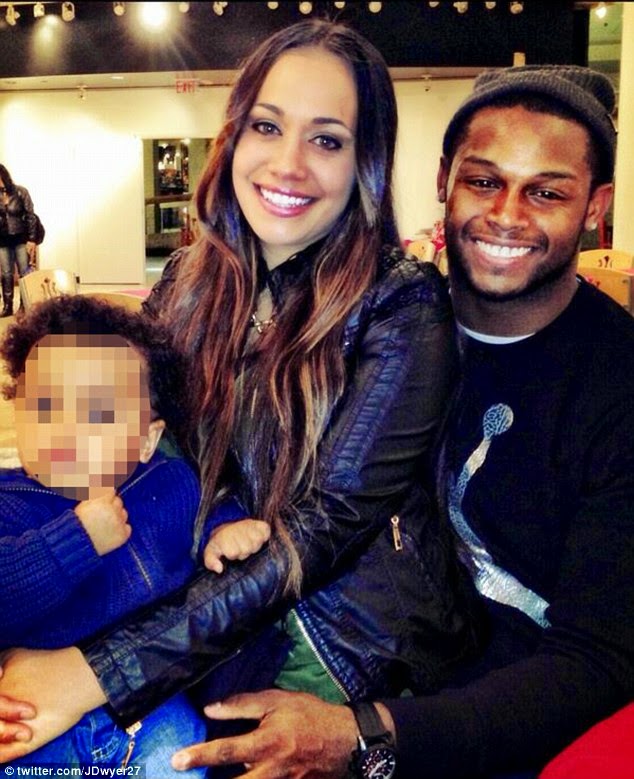 The ideal family, according to the jew.

In the first encounter, police say Dwyer attempted to kiss and undress his wife, but she refused.

The next day, Dwyer punched his wife in the face and threw a shoe at her and instead struck their 17-month-old son, whom she was holding, police said. The child wasn't injured.

Witnesses told police that Dwyer's wife said, ‘I'm calling the police’ as she held her swollen face and clutched her son.

Scenes from a dead nation. Whites wear shirts with this animal's name on it.

Dwyer denied committing an assault, though he acknowledged that he punched walls in his home, threw a phone and that his wife bit his lip during the disputes, according to a police report. 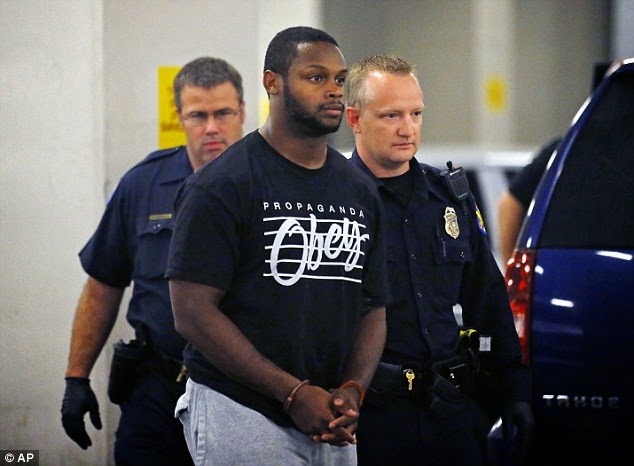 Apparently the camera has a "They Live" setting.

Neighbors heard a fight and called police, who showed up at the residence but left without making an arrest because Dwyer hid in the bathroom and the woman said no one else was at the home, Sgt. Trent Crump said.

The negro hero and false god, hiding in the bathroom after battering his tan every woman.

Hardy was convicted of assault on a female and communicating threats after the victim said the 6-foot-4, 275-pound player threw her in the bathtub and onto a sofa covered with guns before threatening to kill her. Hardy is appealing the ruling.

Maybe we'll get another anti-gun sermon at halftime, or hear about how the "legacy of slavery" caused the low intelligence and poor impulse control.

His best year for Pittsburgh was 2012 when injuries depleted the team's backfield in the middle of the season and Dwyer filled in and had 100-yard-plus games in consecutive weeks.

Look at that boy run.

If you're claiming to be pro-White, but waste time and money on jewish distractions like sports, this needs to change. Turn off the Africa Ball, turn off the telavivision. Get in shape. Learn to use a firearm. The U.S.S.A. is finished.
Africa Ball Arizona Cardinals Content of Their Character Domestic Violence Jewish Controlled Sports Jonathan Dwyer Muh Dick NFL Ray Rice Roger Goodell Sleeping Whites