September 25, 2014
A war is currently raging for the soul of White nations. On one side is tradition, heritage, faith, culture and a future for White children. This is opposed by the jewish weapons of materialism, careerism, the equality cult, feminism and the sodomite agenda. Never has the divide between good and evil been more obvious. This is the mixed blessing of our time. There is no possible excuse for siding with the nation wreckers, their game has been completely exposed. Still, many Whites in the west choose cowardice and a comfortable life for the moment, casting their lot in with the rot. In a nation that has been under the yoke of jewish communism the Whites are far less pliable.

Queerfest, an annual LGBT rights festival in St. Petersburg, was forced to cancel most of its events following attacks, pressure from authorities, bomb threats and last-minute cancellations.

In the U.S.S.A. this spiritual sickness would be quietly tolerated, we would allow this satanic evil to save our pitiful job and the few crumbs that fall off the kosher plate. In Russia the perversion is defeated by awake and aware Whites.

A group led by anti-gay lawmaker Vitaly Milonov tried to get into the venue where the invitation-only opening event was held last Thursday, one of a series of obstructions the festival has faced over the last week.

Russia battles the same evil that devoured so many other White nations, the jew with a thousand masks, the devil with a terrible bargain for each person.

About 200 people, including foreign diplomats, were gathered when Milonov and 15 to 20 protesters tried to stop the opening.

No prizes for guessing which ruined nations these diplomats represented.

He ended up standing near the door, swearing and shouting insults while telling the guards that ethnic Russians should not protect LGBT people. He described the audience as "pedophiles who rape children."

This is a true statement. This abomination is promoted by the jew to destroy White families and prevent the birth of White children. There are no "Queerfests" in African nations where sodomites are executed. This evil is solely targeting Whites.

Having thrown vials containing a gas that smelled of rotting fish under the door, anti-gay attackers prevented visitors from entering and leaving, spraying green dye from syringes on them.

This is an example for us all. 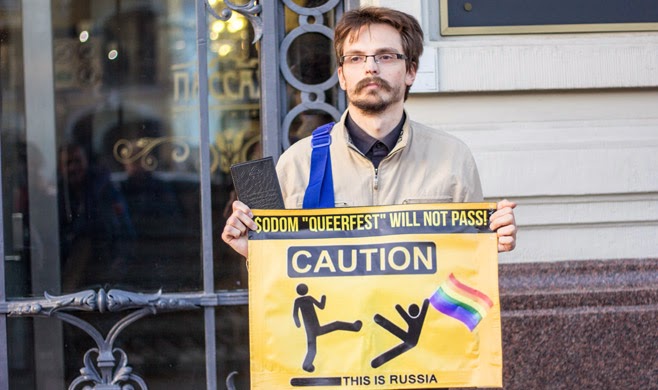 "They met in the stairwell, or he passed the baton to them, but I can't say for sure because the fact was that thugs came just after Milonov had left."

Parents Day, a meeting with parents of LGBT people scheduled to be held on Monday, was also canceled "due to the inability to ensure the safety of participants. We fear for our parents. While we can cope with the situation, they don't have such strong nerves," Anisimova said.

The enemy is running scared.

The festival's closing event, the "Stop Homophobia in St. Petersburg" concert Saturday featuring Swedish rock singer Jenny Wilson, will be held Saturday, but the organizers may move it into another venue that is less likely to be pressured by authorities and anti-gay activists.

Maybe hold it in Sweden, land of burning cars and mudslime rape. I'm sure it would get a warm reception.