September 15, 2014
The savage and horrific crimes formerly confined to the Latin American sewer and the African all against all are now making their way into the West, crossing open borders and being brought in by the jew nation wreckers. In the Chicago rot, a once prosperous city devastated by "diversity," machete attacks by brown sewage are becoming a common event. The genetic alien brings the same pathology that destroyed their own homelands to the U.S.S.A. We don't magically uplift them with the endless tax payer handouts and pathetic groveling appeasement. Instead, they pull everything down. Chicago will soon join Detroit, a city of millions placed on the ash heap by predictable genetic differences.

Seven people, including three 15-year-olds, are accused in a machete attack that left a deep wound on a man's head after he and his brother refused to flash gang signs at a Chicago train station, authorities said Wednesday.

May-hee-can invaders tearing into negroes. The rich flavor of our national "salad bowl." When the Whites are gone this is what will remain. Endless tribal warfare, senseless and moronic violence, no culture, no intelligence, no hope. 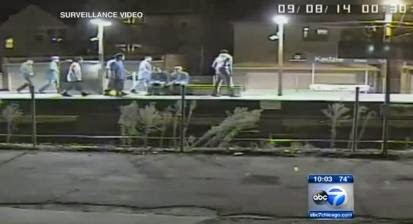 I'm sure we can get them to vote for the Republican party.

Cook County State's Attorney's office spokeswoman Tandra Simonton said a 26-year-old man and his 17-year-old brother were sitting there when the seven suspects — four adults and three juveniles — surrounded them and told them to flash gang signs.

Scenes from a dead nation. An affirmative action negress tells the story. Natural conservatives, the saviors of the Loser Party, wanted to see them flash the "Republican" sign.

When the brothers refused, saying they were not in a gang, one of the adults threw a beer he was holding to the ground, pulled a machete out of his pants and "held it to the throat of one of the victims."

We need more amnesty and foreign invasion, just ask any elected criminal. They're hard-working and decent. Only some of them pull machetes out of their pants.

One of the juveniles pulled out a box cutter and pointed it at one of the brothers, too, Simonton said.

The suspects blocked the brothers' path so they couldn't escape. The older brother tried to keep the situation from escalating further, but "one of the defendants swung the machete at him ... causing a massive head wound," she said.

Tribal warfare. A biological weapon unleashed by our kosher enemies. 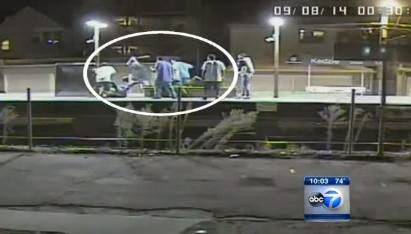 
She said the blow left a gash 6 inches long and 1.5 inches deep on the man's head, adding that the attack was captured on Chicago Transit Authority surveillance video. The man was taken to an area hospital, where he received about 30 stitches.

Yes, we have grainy footage of the invaders. The surveillance state is a good thing, it can document the crimes of the meskin welfare colonists. This demographic disaster is also good, of course.

Police said the seven were all arrested about 45 minutes after the attack not far from the station.

It's practically a miracle.

At a court hearing Tuesday, the four men were formally charged with felony counts of robbery, aggravated battery with great bodily harm, and trespassing on CTA property.

How about "attempted murder?" The "races" justice system prepares to slap the wrists of these pieces of living dog shit. We could never punish all these la-teen-oh criminals, after all. Let's just give up, that's nice and logical.

As Whites we hold the lamp of civilization. If our enemies win, if we are eliminated, that light will go out forever. What will remain is endless darkness, half-formed aliens monsters preying on each other, ruins and rot. We must not fail.
All Against All Brown Line Chicago Death of a Nation Gang Signs Illegal Immigration Kedzie Loser Party Machete Attack Mexico North Natural Conservatives The Chicago Plantation