Walking While White in Memphis

September 10, 2014
In the U.S.S.A. the War on Whites continues to rage, in our streets, at our open border, on the electronic synagogue. Our jewish enemy and their useful idiots are no longer even trying to conceal their agenda. They want Whites to disappear. We are fighting for our racial survival in a dead nation that we owe no loyalty whatsoever. They want us dead. Every demographic shift, every promotion of the sodomite agenda, every negro pack attack represents the planned outcome of decades of cultural marxist subversion. The long march through the culture has killed America, now all that remains to be determined is whether there's a future for Whites.

At least three people were beaten by a group of teenagers Saturday night in the parking lot of a Kroger grocery store in Memphis.

Another racially motivated hush crime. Hey, did you hear about those amazing Africa Ball negroes?

The violence was caught on video by a store employee.

You can watch the low quality footage of the inevitable end game of "diversity" and democracy at the link below.

According to WREG, a 25-year-old man said he was attacked by the group of teens as he walked to his car.

Walking while White. Another unarmed, nameless victim of the evolutionary dead-ends we have been forced to share living space with by our kosher, criminal government. Get it in the memory hole. 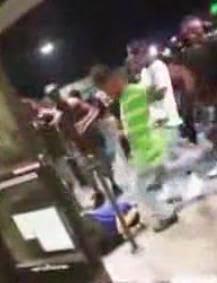 The reward for over fifty years of negro appeasement.

Two Kroger employees, ages 17 and 18, ran to help the man, but they were apparently repeatedly hit in the head and face.

A nation is shared vision, culture, religion and genetic make-up. Reject that truth and pay the predictable price.

The Kroger employees claimed that pumpkins in excess of 20 pounds were thrown at their heads while they were on the ground. That can be seen in the video.

Elect a communist sodomite mulatto. It will improve the negro behavior, we were told.

Both of the Kroger employees lost consciousness as a result of the attack, WREG reported. Eventually, a security guard stepped in.

The motivation for the attack was not immediately known.

Riddle wrapped in enigma. What could possibly explain this?

The racially motivated attacks against Whites continue, ignored by the dinosaur media and our elected criminals. The goal of White genocide is advanced. You need to be armed. You need to get organized. A once great White land is about to be placed on history's ash heap.
Black Pack Attack High Quality Footage Hush Crime Knockout Game Kroger Memphis Race Erased Summer of Dark Mobs Teens Tennessee Unarmed Victims Walking While White