October 01, 2014
The foreign invasion that has taken place over the last several decades is good for the Loser Party and paycheck conservatives, we are told. We need a lot more Latin American sewage, it's a mighty strength. Once they slither across an invisible and increasingly meaningless line they will somehow transform into good little imitation Whites instead of continuing their predictable third world pathology. If you want to get those big conservative dollars, you'll need to double think this. Or simply join the communists and openly state the goal of destroying what remains of White America. The one party system wants us dead. The only alternative is White nationalism.

The mayor of a Los Angeles suburb has died after being shot multiple times in the torso by his wife during an argument - but she has been released without being charged.

Lyvette Crespo, 43, shot her husband Daniel Crespo, 45, after he punched their 19-year-old son, who had intervened as the couple fought at their home in Bell Gardens at 2.30pm on Tuesday.

A scene right out of the Latin American all against all unfolds in a state drowned beneath a flood of brown sewage. A criminal invasion sponsored by our illegitimate government lays waste to the beauty and prosperity that once was.

No arrested were made. A wise la-teen-ah, free of any guilt.

Family members said the couple, who had been married since they were teenagers, had recently been fighting about money, KTLA reported.

"Ey, where be dee pesos? Now I shoot dees taw-soh, I theeennk."

Sheriff's homicide detectives 'determined that no arrests will be made at this time' after interviewing Mrs Crespo, the department said in a statement late on Tuesday.

Eroding rule of law. We could never punish all these meskin murderers. 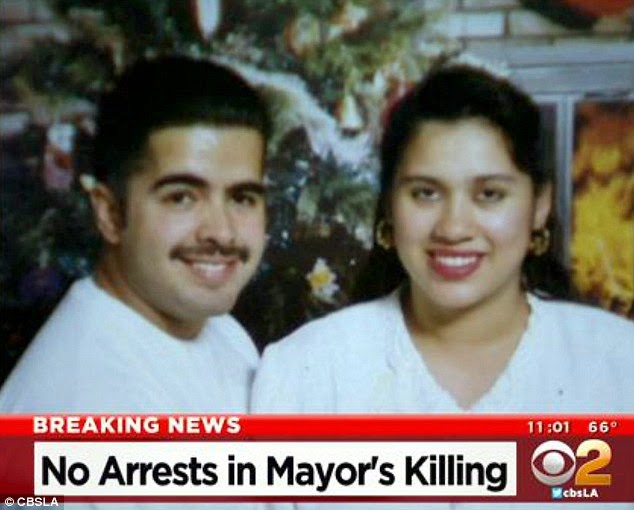 Mexican violence and corruption in the U.S.S.A.

Crespo punched his son in the face during their struggle, NBC LA reported.

Too bad he's dead, the Loser Party could have used this animal in their failed 2016 campaign against the lesbian witch.

Only two children? Are they sure this guy's really a la-teen-oh?

State lawmakers said they were shocked and devastated by the news of Crespo’s death.

"It's going to be hard to find another diversity quota-filler on short notice."

Would the last White in California please turn off the lights on the way out.

The city's website on Tuesday night had an image of a black bow and a statement from Mayor Pro Tem Priscilla Flores and three council members that said the shooting doesn't appear to be related to Crespo's mayoral activities.

"It's just ordinary la-teen-oh failure, not an MS-13 hit or something."

Our criminal government no longer represents Whites in any way. We owe them no loyalty. We must unite based on common heritage, not misplaced allegiance to ideas that no longer hold any relevance, to symbols that have lost all meaning. The U.S.S.A. is done. The time has come for the restoration of a White homeland.
Bell Gardens Daniel Crespo Death of California Los Angeles Loser Party Lyvette Crespo Mexico North Natural Conservatives No Arrests Were Made Open Borders Wise Latina