October 28, 2014
Our enemies aren't even trying to conceal their genocidal agenda any more. Europe must be transformed into Africa. Naturally the jew will be right at the center of this assault on White homelands, aided by cowardly White careerists. The European experiment in "multi-culturalism" has been a spectacular failure, creating hostile nations of brown aliens inside our lands. Slowly White Europeans are starting to sense that something is wrong and action needs to be taken. Our racial survival is at stake.

A march by German self-described “hooligans” and alleged neo-Nazis against Islamic fundamentalism in Cologne, Germany, turned into a bloody riot Sunday involving more than 4,000 people that saw 43 police officers wounded.

With the possible exception of Russia, no European country was more devastated by the disastrous jewish century than Germany. It's now a land of mosques, ugly holohoax memorials and guilt over imaginary crimes. Showing White pride is a criminal offense. In spite of all of this, there is cause for hope. 4000 stood against the kosher nation-wreckers, against the brown mudslime sewage.

Rioters overturned a police van and hurled bottles and fireworks at police, who used pepper spray, water cannons and dogs to quell them.

A preview of the coming collapse. The whole rotten system crashing down, then the battle for White survival.

Riot police were deployed when protesters began throwing bottles and fireworks at less heavily protected police. Around 1,300 officers were deployed in total. Police confiscated a loaded handgun, machetes and batons from members of the crowd, according to Bloomberg. One protester was injured in the clashes.

Not every European is quietly slouching toward a grave dug by a jew shovel.

Many protesters had tattoos and paraphernalia indicative of the far-right movement in Germany. Some were heard shouting “Foreigners out!” and “Free, social and national: National Socialism now!”

Common sense measures to save our White homelands are "extreme" according to the enemy in the media and government. Europe for Europeans. To believe this makes you a "not see" that electrocuted the precious six million on belts and then made them into a living room furniture set. 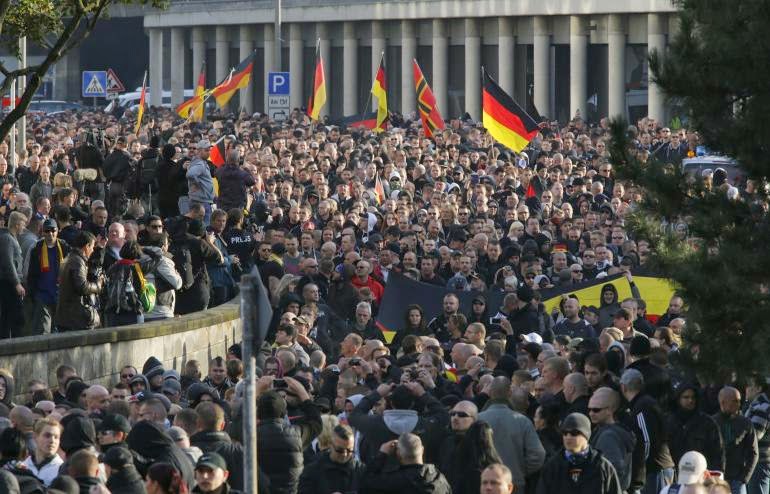 A group of 500 people held a counter-demonstration nearby under the slogan “Shoulder to shoulder against racism and religious extremism.”

The pathetic answer. Shoulder to shoulder to the kosher slaughter.

Just under 4 percent of Germany’s population is Muslim. Around 6,300 of those nearly 3 million Muslims are Salafists, but the movement is growing, according to German domestic intelligence chief Hans-Georg Maassen. He said Saturday that number is double what it was three years ago.

The growing rot. They must be removed if Germany is going to survive.

Can the decline be reversed? It might seem unlikely, but we've seen Whites rapidly turn things around before. May this demonstration be the first of many more, until the alien is defeated and White homelands are restored to their former glory.
Cologne Europe for Whites Foreign Invasion Foreigners Out Germany Holocaust Kosher Con Game Muslims National Socialism Nazis Religion of Peace Whites Waking Up