October 30, 2014
The persistent and predictable negro failure is the elephant in the room when the State Religion delivers its sermons on "equality." It's obvious to anyone but an idiot that the negro is not a sun-tanned White but is a genetic alien incompatible with White civilization. It took complete jewish dominance of the media, the entertainment industry and the educational industrial complex to sell the lie that there are no racial differences. Even then the truth had a way of breaking through. Now, the kosher myth has been exploded. We've seen the content of their character in grainy videos and hush crime stories buried in the depths of the web. The reality of negro failure has been dragged into the light. Now it's time for Whites to hear the wake up call and restore our lands.

Two teenagers were beaten, robbed and then shot at by a group of people Sunday in South St. Paul, police said.

Negro no-go zones in the land of the free. Semi-human monsters lurking in our midst, full of jealousy-fueled and jew encouraged hatred for Whites.

Two suspects from the group, which reportedly included as many as 13 people, were arrested near the location of the alleged assault, Police Chief Bill Messerich said Wednesday.

Negro mob rob. This is the future, packs of feral animals preying on unarmed and unprepared Whites.

Charges against the two -- both 15-year-old boys from St. Paul -- are pending, he said.

Those wacky "boys" and their harmless little pranks. Race erased, hide the truth, hey, isn't there Africa Ball this weekend?

The victims are male, ages 17 and 19; one was hospitalized, while the other was treated at the scene and released, Messerich said. 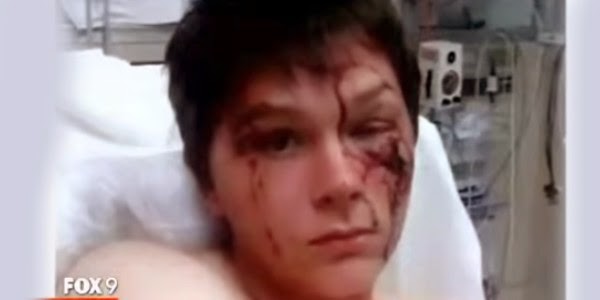 Another forgotten White victim of "diversity."

The victims told police they were assaulted and robbed of money at gunpoint in the parking lot of the Fifth Avenue Plaza strip mall. They said gunshots were fired at them when they ran off.

The content of their character. Negro dog shit shooting at their fleeing victims. Still not sure if you need to be armed?

Citing the open investigation, Messerich said he could not comment on a possible motive.

It's really hard to figure out. Besides, he doesn't want to lose his careerist position by stating the obvious.

The violent nature of the robbery makes the case unique in South St. Paul, he said.

There's nothing unique or unusual about this crime. This is typical negro behavior. It could happen anywhere in the U.S.S.A. and it does.

"We don't have any additional information about this group causing other problems in South St. Paul," he said.

The collapse is coming. If you're not armed you're just another target for the negro animal. We need to get ready for the coming brown nightmare and built a White future from its ashes.
Bill Messerich Black Pack Attack Minnesota Mob Rob Pathology of the American Negro Robbery Gone Wrong St. Paul Unarmed Victims