October 09, 2014
We are being lied to by those in power. Their goal is White genocide. To achieve this end they must destroy our unity and proclaim their own moral superiority in perpetrating this horrific crime against our race. We get narratives. A 300 pound negro monster fresh from a robbery becomes an innocent teen. A foreign invasion across our southern border becomes "immigration," just like your White ancestors. African disease on American soil is nothing to worry about. Ruined cities are caused by "racism." Low intelligence is a legacy of slavery, despite the fact that the African negro has an even lower I.Q. thanks to the lack of admixture. On and on it goes. This is the moment in history for Whites to wake up. The situation has never been worse, the pathetic kosher deceits never more blatant.

Protesters took to the streets of south St. Louis last night and early this morning following the fatal shooting of an 18-year-old African American man by an off-duty police officer.

This living dog shit might have been "African" but it sure wasn't "American" in any meaningful way.

Get ready for the gun this negro fired to transform itself into some harmless object or nothing. Brace yourself for whole cloth tales of what a good boy this worthless monster was. Make sure you're armed for the rioting that might follow, for the simians stirred up by jewish mythology trying to break down your door.

He thought were acting suspiciously about 7:30 p.m. Wednesday. When they saw the officer make a U-turn, they fled.

He drove through the streets after them and then left his car and chased them on foot. One of the men then turned toward the officer and approached him “in an aggressive manner,” Dotson said. The suspect and the officer got into a physical altercation.

This will be transformed by lying negroes and jew marxists into "he had his hands up the whole time!"

Dotson said the man then ran up a hill and fired three times at the officer before the officer returned fire.

Investigators recovered a 9mm Ruger at the scene, which Dotson said was used by the 18-year-old, whom he described as “no stranger to law enforcement.”

“The suspect continued to pull the trigger on the gun … we learned that that gun had malfunctioned and it was jammed,” Dotson said.

Trying to "bust" at the "five-oh" gone wrong.

At least there's some good news.

“When the investigation is complete and during the investigation, in consultation with the circuit attorney’s office, we will present that case to them and ask them to review it to make a decision about the officer’s actions and if they were appropriate in that situation,” Dotson said.

"I want to keep this sweet job and keep on farting through silk, so I'm going to pander to anti-White elements." 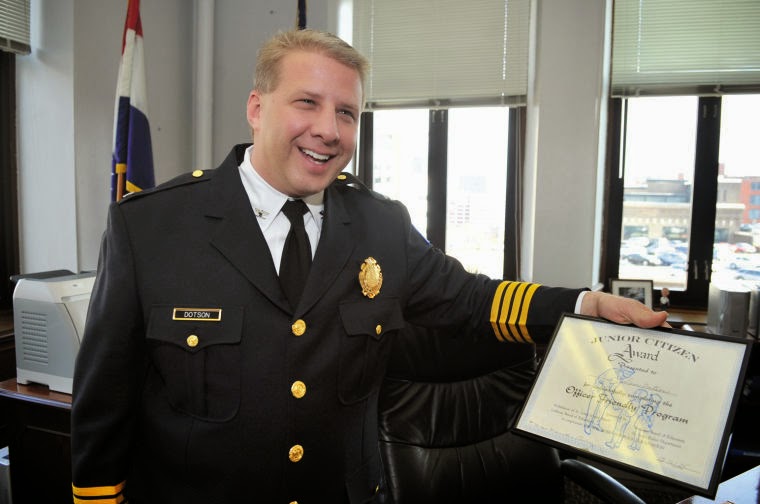 Relatives quoted by local news organizations said the man had only a sandwich, not a weapon.

Usually I have to wait a few days to see my predictions vindicated, but not this time. He was just having a sandwich. One that can fire bullets, apparently.

Dotson said police were interviewing witnesses to get a firmer picture of what happened.

In the aftermath of the shooting, at least 200 people took to the streets, jeering at police and blocking traffic on Grand Boulevard, television footage showed.

Some chanted “hands up, don’t shoot,” the mantra of protesters in neighboring Ferguson, Mo., where and unarmed teen Michael Brown was shot and killed by a Ferguson police officer Aug. 9.

Just "unarmed?" Don't forget "gentle giant" and "turning his life around" and "on the way to Grandma's."

So was the crowd reaction. Police reported no significant violence. There was one arrest of an unidentified individual for having a gun.

Everything's fine. No violence here. Just another unarmed negro with a gun.

The dinosaur media and our criminal government is now pushing for open race war, creating pack of lies "narratives" to encourage negro violence against Whites. We need to be armed and ready. We need to get organized. The U.S.S.A. is ready to burn.
Death of a Nation Dinosaur Media Gun Transforms into Sandwich Michael Brown Missouri Pathology of the American Negro Rioting Sam Dotson St. Louis Teens