October 08, 2014
We are losing the war on negro terrorism. Hush crimes against Whites are common and are met with, at best, race erased coverage that's quickly placed in the memory hole. White victims are selected for the "knockout game," something the media jew insists is not real, despite massive evidence to the contrary. Whites are slowly waking up, but the kosher distractions have been ramped up as the U.S.S.A. is prepared for the cremation oven. Watch the Africa ball. Turn in your gun. Chase worthless federal reserve forgeries. The center can not hold.

Genetic aliens on the loose in my dead gay country. The same predictable negro failure, our reward for over fifty years of appeasement.

Ravenell said the trio "set out to terrorize residents and create havoc Saturday."

At approximately 5 a.m., the men were in a Chrysler New Yorker that slammed into a metal fence and brick post outside of a home on Bryan Drive, the sheriff said.

This is why you need to be armed. When a car full of negroes slams into the fence you need to be ready to deal with the vile contents that will spill out.

Before they made their getaway, they smashed up items inside the residence, beat on the victims' vehicles and two of the men are accused of pinning a female victim in a bathroom and sexually assaulting her, according to Ravenell.

Unarmed victims. A woman raped by negro animals. This is the future of our "diverse" national carcass. 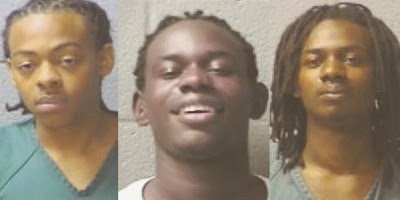 "A responding officer observed the vehicle and attempted a traffic stop but the driver, Chris Asher, did not pull over," Ravenell said. "Instead he recklessly drove through the streets of Orangeburg fleeing the officer, reaching speeds in the triple digits."

Fifteen minutes later, the Curry brothers and Asher fired multiple shots into a vehicle containing five passengers while it was traveling along Russell Street, Ravenell said.

The only solution is removing these evolutionary dead ends from White nations.

All three are charged with burglary. Asher and Kendalon Curry are also charged with first degree sex/assault with intent to commit criminal sexual assault.

Now our "races" justice system can fail to punish these appalling crimes. 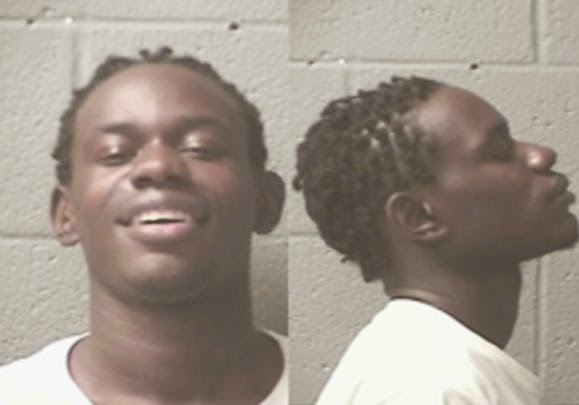 Take a long hard look at the picture of this criminal negro. Flat nose. Muzzle. Receding forehead. Soulless dead eyes. Laughing about its horrific crimes, displaying the content of the character. This is the face of the enemy, the face of mindless evil. The jew turned it loose. Be armed. Be ready.
Christian Asher Content of Their Character Home Invasion Ja'Vall Curry Kendalon Zarkee Negro Terrorism Orangeburg Pathology of the American Negro Rape Apes South Carolina Unarmed Victims