October 21, 2014
We have reached peak negro. After twice electing a mulatto homosexual, after over fifty years of pathetic negro appeasement, after being assured that we're evil by the electronic synagogue and the jew-controlled educational industrial complex more and more Whites are finally taking an honest look at just what this money, blood and pitiful groveling has purchased. Today's American negro is completely hopeless, a dependent animal equal parts helpless eternal victim and savage monster. "More needs to be done!" they endlessly wail, as we're forced to wonder what more we possibly could have done to uplift these genetic aliens. Pretending they were equal was childish folly. Trying to somehow turn them into cut-rate Whites was suicidal madness.

Rams fans and Ferguson protesters fought Sunday afternoon outside the Edward Jones Dome after the Rams secured a victory over the visiting Seattle Seahawks.

While Red was beating Blue in a jew-produced circus even the most debased Whites were forced to address the reality of negro failure.

About 3 p.m. Sunday, a handful of fans argued with protesters, who were yelling and chanting, near the intersection of North Broadway and Cole streets.

Time for that conversation about race we're always be promised. It consisted of "We gots da raht!" followed by violence.

A fan appeared to spit on one of the protesters and he was then struck on the head, at which point a melee ensued and punches were thrown.

Something kind of looked like it happened. Trust me, Whitey was way out of line. Then the traditional black behavior.

St. Louis police arrested two protesters. One was a 49-year-old woman. The other was her 17-year-old daughter. Police did not release the names of the women.

It's none of your business anyway. Please go back to sleep. Did you hear that our amazing coal black Rams beat the equally "diverse" Seahawks? 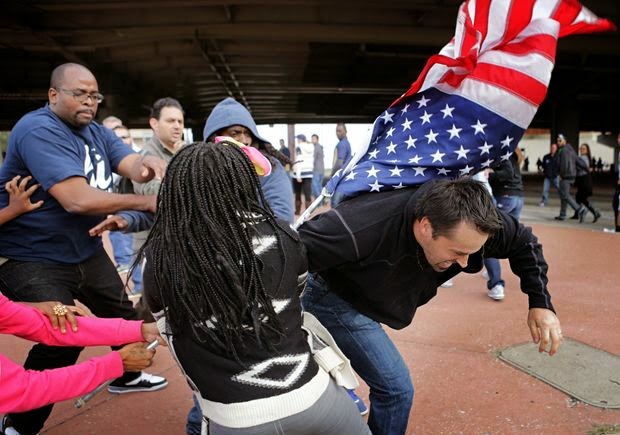 The land of the fee and the home of the slave.

The content of their character.
The mother and daughter who were arrested are black. All of the victims are white, police say.

The protesters were part of the Michael Brown protest upset with the fatal shooting in Ferguson on Aug. 9. Some in the protest crowd carried signs that read, "Justice for Mike Brown" and "Indict Darren Wilson." Wilson is the officer who shot him, and a grand jury is considering the case.

What, no references to "unarmed" and "turning his life around" and "on his way to Grandma's?" I'm very disappointed with you, dinosaur media.

At one point during the scuffle, a protester carrying an upside-down American flag used the pole as a weapon, attempting to jab a fan with the pole.

Symbols of a dead nation become a weapon in the hands of an alien monster. 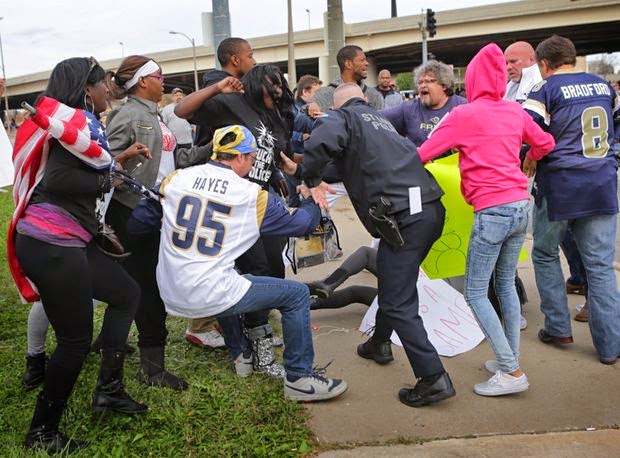 White negro worshipers get to know the real negro.

A short time later, after the initial confrontation, a different fan grabbed the flag and ran with it for a brief period; protesters then wrestled the flag back.

It's time we grab our country back.
Full Story.

The negro has no place in a civilized nation. The only humane solution is their removal.
Darren Wilson Death of a Nation Debased Whites Jewish Controlled Sports Justice is Racist Michael Brown Negro Fatigue NFL Rams Seahawks St. Louis