October 23, 2014
A nation is shared culture, values, religion and vision for the future. Without these common elements all that exists is simmering resentment, distrust, violence and ultimately collapse. In the U.S.S.A. we no longer have a living nation, just a national corpse being feasted it on, down to the bone. When the carrion has been devoured, the scavengers will turn on each other. In our capital, non-White animals are now regularly rushing the Black House, hoping to get at the mulatto that failed.

A Maryland man jumped the White House fence and ran onto the North Lawn before being subdued Wednesday night.

What do you think this is, the southern border?

Dominic Adesanya, 23, stood on the North Lawn around 7.16pm, gesturing and lifting his shirt, before being taken down by K-9 units and subdued by the Secret Service.

A negro gentle giant subdued by the increasingly inept Praetorians. Symbols of a country that is dead and gone are attacked by an unarmed age 23 teen.

On the lawn, Adesanya kicked a Secret Service K-9 unit that ran at him before another dog wrestled him to the ground and he was taken into custody.

The content of their character. Kicking dogs, another vibrant example of the "African American" contribution to the national salad bowl.

'Dogs got him,' a spokesperson for the Secret Service told Reuters after the incident. The White House was put on lockdown for a little over an hour but was not evacuated.

National prison. Lock down. The end draws near.

Adesanya's last post to Instagram on Tuesday showed an I Voted sticker captioned 'Voted for this B #ImpeachObama.'

The lasting legacy of our first mulatto president.

Other photos show him in action for Stevenson University in track and field, or showing off his physique in shirtless selfies.

Speaking with ABC 2, Adesanya's father said his son had been arrested at the White House before and that he wanted to speak to the president about how people were out to get him.

On a LinkedIn page with zero connections, in place of a job title, he describes himself as an 'American Slave' and rants about the Rothschild banking family.

The negro named the jew, in between not working and the traditional African pathology. 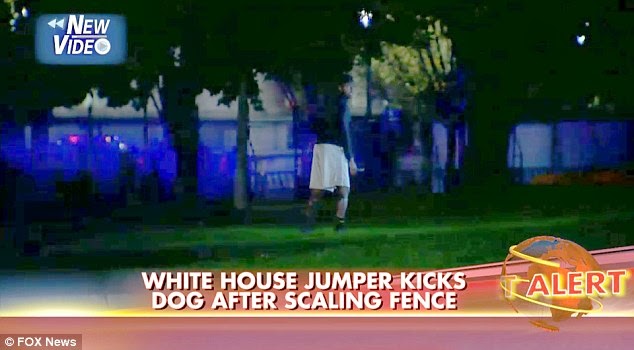 Adesanya was reported to be unarmed at the time of his arrest and was taken to the hospital.

Whether he was turning his life around or on his way to Grandma's remains unknown at this time.

In September, Iraq War vet Omar Gonzalez made it over the fence and into the White House itself carrying a knife before an off-duty agent subdued him.

Foreign mercenary turns on the emperor.

The Gonzalez incident, along with several scandals that have plagued the Secret Service as of late, led to the resignation of Secret Service director Julia Pearson.

Be sure to put "failed to subdue various brown aliens" at the top of that resume, Julia.

No human being is illegal. He hopped that fence for a better life of telling President Butt Naked that jewish bankers control our government. Even a broken clock is right twice a day. The dogs got him. The wonders of "diversity." The death of the West.
Death of a Nation Dominick Adesanya Foreign Invasion Julia Pearson Omar Gonzalez Open Borders Rothschild Secret Service White House Young Obama