African America in Ferguson: "They Have Insurance"

November 25, 2014
For months we were fed a non-stop jewish narrative about innocent negroes turning their lives around being executed by evil White devils for no reason whatsoever. The goal was to promote negro violence and encourage more pathetic negro appeasement and cowardice from Whites. In the end, the Rule of Law prevailed against all odds, the truth won a rare victory over the cultural marxist deceits. Instead of cowardice, Missouri Whites began stockpiling ammunition and preparing for war. The seeds of a White nation are being planted. The next step is organizing for the common defense and then the establishment of our own White homeland.

Meanwhile, the negro behaved in a manner that we've all come to expect from this failed race, soiling its own nest while soldiers did their best to control this latest embarrassing display of the content of their character. After last night there can be no doubt that the U.S.S.A. is gone. Our race is now our nation.

The streets were quiet but fires continued to burn Tuesday following a night of violence triggered by a grand jury's decision not to indict white police officer Darren Wilson for the August shooting death of unarmed, black teen Michael Brown.

The last gasp of the kosher narrative. Don't forget "turning his life around," "getting ready to attend college," "gentle giant," and "on his way to Grandma's house." The lies were rejected. White America has had enough. The next step is declaring our independence.

The content of their character. It was madness to think this failed branch of humanity could live in a White nation and obey our laws.

St. Louis County Police Chief Jon Belmar said at a 1:30 a.m. CT news conference that at least a dozen buildings were set ablaze and that he had heard at least 150 gunshots, none fired by police.

Half a century of "civil rights" and blank checks, here's the final destination. Negroes turning an American city into something out of South Sudan or El France.

"I'm disappointed this evening," Belmar said. "What I've seen tonight is probably worse than the worst night we had in August."

Compared to what will happen in a few years on our present course of national suicide, this is nothing.

He said protesters could not be controlled "unless we bring 10,000 policemen in here."

Make sure they respect "human life!"

Remember, this pathology is for "justice." Most Whites have had enough of this nonsense. We're armed. We're ready.

The chaos grounded flights in and out of St. Louis' Lambert International Airport airlines until early Tuesday"to provide a safe environment for law enforcement activities, the Federal Aviation Administration said.

What an Ebola outbreak couldn't do is achieved by a two-legged virus. Middle America is transformed into the African Heart of Darkness.

Monday's violence — reminiscent of the unrest that rocked this St. Louis suburb for several days following Brown's death last summer — came despite efforts by Brown's family, civil rights activists local and state authorities and President Obama to tamp down anger in the wake of the grand jury's findings.

The same vultures, profiteers, marxist agitators and criminals who worked endlessly to make sure we'd see negro riots now can claim to have heroically worked to prevent this massive bongo party. Let it all burn. 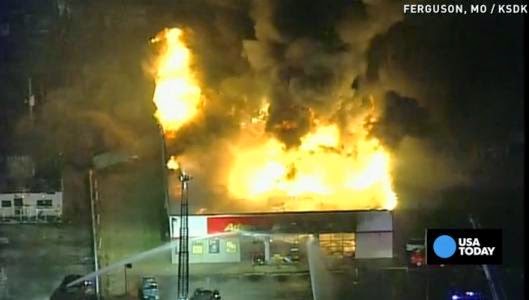 A contradictory speech from President Butt Naked failed to prevent this.

Still, Ferguson resident Malik Rhasaan, a community organizer with Hands Up United, said the carnage was nothing compared with the sight of Brown's body lying in the street for several hours following his death.

Meet the next president of the U.S.S.A. if the jew finger lands on another unqualified negro agitator. Michael Brown's body lies a moldering in the street, his truth is marching on. The truth that we can either have a healthy and prosperous country or a huge permanent victim class of negroes and la-teen-ohs.

"They have insurance. They can rebuild,'' said Rhasaan, 42. "The life of Mike Brown can't be rebuilt. Our patience cannot be rebuilt.

"We could have done something better, like a boycott, that would have hit them in their pockets,'' said Royal, 32.

"Boycott the police!" This is how the mind of the more intelligent and civilized negro works.

Some gathered hours before the announcement in a parking lot across the street from the Ferguson Police Department. Many stood right at the edge of the lot, almost in the street, chanting, "No justice, no peace, no racist police."

Careful what you wish for, you just might get it. 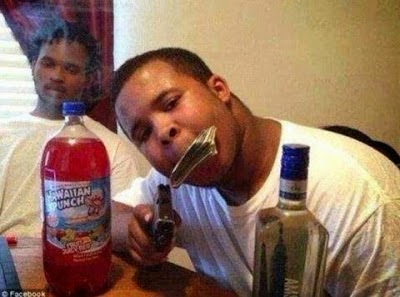