November 13, 2014
One of the worst ideas Whites have ever had is that we can make the negro stay at a safe distance or at least make it behave slightly better by throwing money at it. The disaster that has naturally followed from this madness is now all around us. After fifty years of paying and groveling the negro we now have is worse than ever and not the slightest bit grateful for the massive sacrifices made in a failed attempt to uplift this alien race. Negro appeasement only leads to more demands, more attacks, more "das races," more of the same genetic determinism, now worsened by the realization that Whitey is going to surrender each time there's the inevitable conflict that arises from trying to house Stone Age monsters in a civilized White nation.

I would sum up my attitude toward the American negro as "Millions for defense (and removal), but not one cent for tribute!" Meanwhile, the family of a soulless African monster that brought a deadly disease to the U.S.S.A. just hit the kosher jackpot.

The family of Thomas Eric Duncan, the only person to die of Ebola in the United States, said on Wednesday it had reached a settlement with the hospital that had treated him and admitted to making mistakes in addressing his care.

Aren't you glad you're killing yourself in some horrible job so that a foreign negro can lie to authorities, bring horrific disease into our country, receive excellent treatment on your dollar and than sue with a jew after this amazing and suicidal generosity fails to live up to an impossibly high standard. Hurry up and die, U.S.S.A.

The settlement includes financial support for Duncan's family but the amounts were not revealed.

This is criminal. Charity toward the negro deemed inadequate. Write a check to its family. Conceal the sum and bury the story so that the outrage is limited. A nation with spiritual Ebola, bleeding worthless currency, dying.

"We have wrapped this up," family lawyer Les Weisbrod told reporters, adding the family will not be billed for Duncan's care. "The size and details of the settlement are confidential."

As usual a scumbag jew was behind this. No bill for all that free treatment. Big payoffs from working Whites. Had enough yet?

A suit against the Dallas hospital faced long odds due to the state's regulations on malpractice suits that have made it one of the hardest places in the United States to sue over medical errors, especially those that occur in the emergency room, according to plaintiffs' lawyers and legal experts.

Coming this fall from Cohen Films, the feel-good underdog story of the year! Schwoogies are suing for justice, aided by the Light of the World!

The hospital said in a statement the settlement "serves as an example of the common-sense Texas laws that allow discussions to take place immediately and be resolved quickly."

Nothing screams "common sense" like handing out a monetary award to the relatives of a negro that had already been given preferential treatment after it lied. 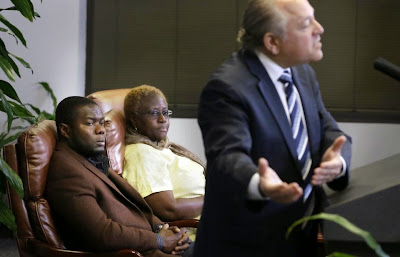 It was later discovered that he had been in Liberia, one of three West African countries hit hardest by the Ebola outbreak.

Sure the negro lied and endangered countless lives, but it's a negro, what do you expect? Now pay up, Whitey.

The settlement will provide financial support for Duncan's four children, his mother, Nowai Korkoyah, who lives in North Carolina, and his father, Jacob Duncan, who lives in Liberia.

The hospital had previously apologized to Duncan's family for not being able to save his life and said it made a mistake by initially discharging him.

"We're so sorry we believed the lies he told us and then tried and failed at great cost to save his worthless life."

(This version of the story corrects sixth paragraph to say Duncan told hospital staff he had been in Africa, not Liberia)

It's getting harder to lie to our readers, but we'll keep trying.

Whites are ignored, our support for the One Party System is taken for granted. The African negro is precious and we must pour resources into it, even after its lying, selfish, shit-colored body is returned to the dirt. Our nation is in the grip of suicidal lunacy. We've been displaced in favor of the brown alien. We owe it no loyalty.
America's Terminal Sickness Ebola Jew Criminal Kosher Con Game Les Weisbrod Liberia Negro Appeasement Negro Lottery Texas Thomas Eric Duncan