November 10, 2014
Whites care about justice. Our civilization was built on the bedrock that a person should be rewarded for doing right and punished for doing wrong. This common sense idea has been endlessly attacked during the disastrous jewish century. We must reward criminality and failure with citizenship, handouts, special preferences and pathetic appeasement. We must punish success with punitive taxation, calls for violence and importing the most savage dark monsters available into White areas. Suffice it to say this kosher approach to building a nation has been an unmitigated disaster. Yet still they come. The latest trend is simply ignoring traditional negro and la-teen-oh dysfunction in hopes of fixing the "races" numbers that present an unpleasant reality of inherent racial differences.

Stick your head in the sand. I.Q. differences? I can't hear you. The negro is getting better, honest.

Minneapolis public school officials are making dramatic changes to their discipline practices by requiring the superintendent’s office to review all suspensions of students of color.

In a few years even verbally correcting a negro "student" will require a letter from your congress critter.

The change comes amid intensifying scrutiny of the way Minneapolis public schools treat minority students and in the wake of new data showing black students are 10 times more likely to be sent home than white students.

It's funny how you see the same statistical over-representation in violent crime, sexually transmitted diseases, welfare dependency and bastard broods. It's odd how this statistical anomaly is extremely robust and seems to follow the negro wherever it goes. You'd almost think there are genetic differences causing this, but that's "races" and you don't want to be excommunicated from our State Religion.

Superintendent Bernadeia Johnson said she wants to “disrupt that in any way that I can.”

"Disrupt" is the right word. Now when little Barkevious goes off like an air raid siren, or tells another "student" that he's "yella" or hops on a desk and starts hooting like an animal or engages in gladiator training in preparation for a life of violent crime the teachers will be totally helpless. "Please stop that, Dujewjuan. Please stop hitting me. Don't make me file a letter for your suspension that will be ignored."

Public School is child abuse. Get your White children out of there. Now. 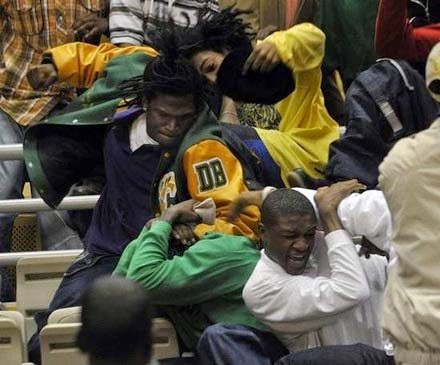 “The only way I can think of doing that is to take those suspensions back to the individuals and try and probe and ask questions,” Johnson said Friday.

Now when JaDuMarcus suffers the predictable failures of a 65 I.Q. mind combined with a tendency toward aggressive behavior we'll be right there to ask "questions" because that's sure to correct the incompatibility with a civilized White nation.

Far too often school ­officials are suspending students of color for a behavior that doesn’t lead to suspensions for white students, Johnson said.

Seems plausible. No actual proof is presented, of course, but since we know the negro is just a sun-tanned White it must naturally follow. Besides, there is a lot of bad White behavior, right? White debil sneaking gum, one hundred negro brawl, I sure can't tell the difference.

The school district is also reducing its police presence at its schools after finding inconsistencies and questions in how schools used police in disciplinary ­matters.

She remains committed to completely eliminating the racial suspension gap by 2018.

Make reality go away by ignoring it. The winning strategy of a dead country.

“Changing the trajectory for our students of color is a moral and ethical imperative, and our actions must be drastically different to achieve our goal of closing the achievement gap by 2020,” Johnson said.

Instead of trying to somehow fix the pathology we'll just turn our backs. Problem solved. Now to get to work on that achievement gap by cooking the numbers.

“In the long term, that is not the solution,” said Marika Pfefferkorn, with the Minnesota Minority Education Partnership. “The way to stop disproportionately is to do a moratorium.”

Making authority figures as helpless as possible will fix the negro. I trust you're armed and ready for the coming collapse.

As part of the broader settlement, the district will be required for the next three years to report its progress on reducing suspensions for students of color to the Office of Civil Rights in the U.S. Department of Education. The district will present that agreement at Monday’s school board meeting.

Report to a Stalinist office. Discuss the "progress." Excellent job, comrade. Your sugar ration will be increased from seven grams a month to five.

The district estimates making those changes will cost about $5 million.

Whites will get the bill for this nonsense, as usual. 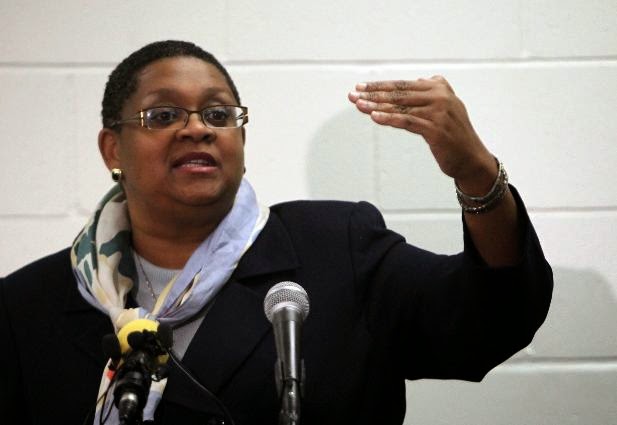 The negress that will solve all our "minority" problems by ignoring them.
85 I.Q. average Bernadeia Johnson Cultural Marxism Genetic Determinism Minneapolis Minnesota Pathology of the American Negro Public School Suspensions We're Not Equal