Negro Murdered, Burned and Eaten in African All Against All

November 04, 2014
Today is election day in the U.S.S.A. Whites are being encouraged to vote for the Loser Party, the same group of careerist failures that have been asleep at the switch for the last fifty years. We're told we can still save America, somehow, by voting for check cashing conservatives who believe that we need lots more may-hee-can invasion, that Israel is our "great ally," that negro failure can be reversed by throwing money at it from a safe distance and that the right to anonymous sodomy must be protected at all costs. Suffice it to say, none of them are going to name the jew behind the late stage spiritual cancer consuming the body politic. We're not going to "democracy" our way out of this mess.

What does the future hold on the present course, if Whites are driven to the margins and then eliminated as per the kosher plan? In Africa we get a glimpse of a world without Whites, without any culture or intelligence, without any hope. Vaguely human savages tearing into each other, the physical expression of the alien genetics the negro carries.

A crowd stoned to death a young man in northeast Congo on Friday before burning and eating his corpse, witnesses said, in apparent revenge for a series of attacks by Ugandan rebels.

They ate the burned body. Unbelievable negro anti-soul and pathology, coming soon to your White nation. If it isn't there already. We must save the negro from itself. Instead of uplifting these monsters, these efforts merely spread their failure across the globe.

The incident in the town of Beni followed a number of overnight raids in the area blamed on the Islamist group ADF-NAUL, who are thought to have massacred more than 100 people this month, using hatchets and machetes to kill their victims.

The religion of peace. Animals hacking at each other with crude weapons, 60 I.Q. minds full of fanatical zeal to spread death in the name of the pedophile false prophet. Send them to the United Kaliphate, send them to Swedenistan and El-France. We need this enrichment.

Witnesses said the man, who has not been identified, aroused suspicion on a bus when passengers discovered he could not speak the local Swahili language and that he was carrying a machete.

White nations must allow any and all brown sewage in, no questions asked. In the Heart of Darkness a negro that doesn't share the local dialect becomes dinner.

"There is no question of negotiation with the terrorists," Kabila said in a speech at a local hotel. "They will be defeated as was the case with the M23. And it will be very soon."

No government control, no rule of law. Chaos and cannibalism.

ADF-NALU is an alliance of groups opposed to the Ugandan government that has operated from bases in neighboring Congo since the mid-2000s, undermining Kinshasa's grip on the area.

I'm sure we could alchemize them into good little Swedish citizens with a little effort. 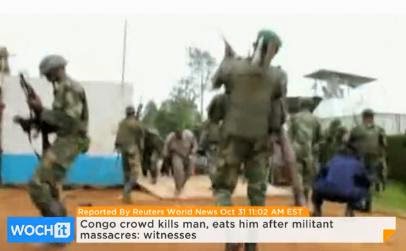 The negro when left to its own devices.

Tensions ran high in the town on Friday morning with around 100 demonstrators blocking the road from the airport into town, throwing stones and waving machetes to demand greater government protection against the rebels.

This is what democracy looks like. Mobs of savages calling for more government to save them from their own predictable failure. We see it in the Congo, we see it in the U.S.S.A. Machetes up, don't shoot.

The Ugandan government has said ADF-NALU is allied with Somalia's al Qaeda-linked al Shabaab movement, but analysts say the nature of these ties is not clear, despite the ADF-NALU's clear Islamist ideology.

“We are the ones we have been waiting for.”

Crowds of mainly young men attacked several peacekeeping facilities with stones and bows and arrows last week, forcing the evacuation of some staff.

Stone Age monsters attack. These are our equals.

The U.N. mission says it has stepped up patrols in the area in the wake of the massacres.

More needs to be done.

Be sure to vote for a conservative coward. That will solve everything and you can go back to sleep. The U.S.S.A. is fed into the cremation oven, its burned corpse to be devoured by negroes. White Nationalism is our only hope against the coming transformation into an African hell.
60 I.Q. Average ADF-NAUL Africa All Against All Beni Cannibalism Congo Islam M23 Negro Anti-Soul Religion of Peace Somalia The Heart of Darkness Uganda