December 15, 2014
Civil disorder is healthy for a nation. We need brown aliens in our streets, burning and looting. This is the sure sign of a strong democracy. We need justice for dead negro garbage. Or shoes. Whichever. As per tradition a crowd of undifferentiated shit-colored protoplasm went ape over the new "Jordans." Whites, also as per tradition, are forced to clean up the mess created by the content of their character. Two-legged turds rioting over sweatshop merchandise with some negro's name on it. Welcome to the last days of the U.S.S.A.

Nearly 50 law enforcement officers were called out to Willowbrook Mall in northwest Houston overnight after people waiting to get their hands on the newest Air Jordan shoes started to get rowdy.

Don't worry White tax-paying sucker, you'll get the bill for this massive presence by the brave 90 I.Q. zookeepers in blue. Meanwhile a mob African and Latin American sewage behaves in a predictable fashion, the same pathology we've seen countless times, the same lessons we refuse to learn.

They were in line for the Air Jordan 11 Retro Legend Blue sneakers. The sneakers cost about $200 and will be released next Saturday.

Simians buying the fruits of foreign child labor with welfare checks. This is what democracy looks like.

The mall set up a single barricade to keep people in line, but on the west side of the mall, a crowd of people tried to push through the barricade and force their way inside. Things got so intense that police were called in to control the crowd.

Stand in the gap, police state. Keep the moronic negro savage from looting. My country tis of thee.

Some even threw rocks at glass windows in an attempt to get in early.

Shopper Katrice Stapleton said, "I came out to get some shoes the 11's for my kids and so far it has been chaos. Complete chaos. They were throwing rocks trying to break the glass and get into the store. That happened about three times and they tried to bum-rush the court to get into the mall."

No one was arrested.

Yeah. Expect this to be the punchline of tales of negro pathology more and more as the rule of law erodes before the fear of negro uprisings.

We recently featured the story of Joshua Alvarez, a man who was waiting in line for days to get his ticket for the Air Jordan shoes, not at Willowbrook Mall, but at the Galleria.

I'm sure it was a rich tapestry of natural conservatism and a desire to do jobs Americans won't. 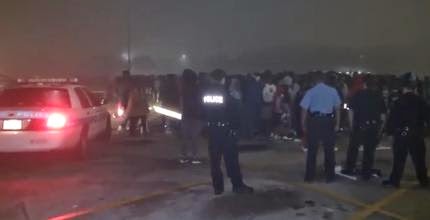