December 10, 2014
The communist indoctrination center or "college," is one of the most successful jewish swindles ever devised. The shkotzim run up outrageous debt taking classes in "White man bad" and "brown alien good." This has created a broke, ruined and easily manipulated generation of Whites who will happily vote for their own destruction, an agenda that isn't even being disguised any more by our ruling criminals. Meanwhile, in Iowa, a state of sawed-off may-hee-can invaders and the first "battle" of the current undeclared and totally one-sided race war, a piece of anti-White "art" has been judged ungood by the permanent victim class.

As long as a single White person still lives, "more needs to be done." Every last White must be hunted down.

KCRG-TV reports Mason, who was out of town Friday, said in a message that she plans to meet with concerned students Wednesday to “prepare a detailed plan of action” that will include input from those affected by the incident.

Hurry up and die U.S.S.A. Whining aliens and invaders will meet with the careerist scumbag, greasy tears streaming down their shit-colored faces because their delicate sensibilities were injured by what was an attempt to pander to them. This is higher education, these are the skills employers need. Genetic aliens who find everything offensive, who want to kill Whites.

Mason also shared plans to move quickly in forming a committee of students and community members to advise her on options for strengthening cultural competency training and reviewing implicit bias training.

This is the sort of idiocy that requires an advanced degree. A ham-fisted attempt at negro appeasement leads to "implicit bias." Here's what the ridiculous tuition bill is buying, White sucker.

She urged university-provided counseling for anyone negatively affected by the incident, which left a 7-foot Ku Klux Klan effigy affixed with a hidden camera on the Pentacrest without permission from 7 a.m. to about 10:30 a.m. Friday.

A generation that needs extensive jewish psychological treatment after viewing ugly "anti-racist" art. This is the Land of the Free and Home of the Brave.

Serhat Tanyolacar, 38, a UI faculty member and Grant Wood Art Colony Printmaking Fellow who made the sculpture, is not facing university consequences, officials said. But he issued an apology over the weekend after telling The Gazette on Friday that he hoped the robed statue would produce haunting reminders of American history that might lead to progress, “something positive.”

Mystery meat wanted to inspire White guilt and encourage violence against Whites but was so totally bereft of talent and awareness of reality that the end result put fear into the negro coward. "Oh lawdy, dah's a ghost! I be needin' dat sigh-col-gee con-sling." 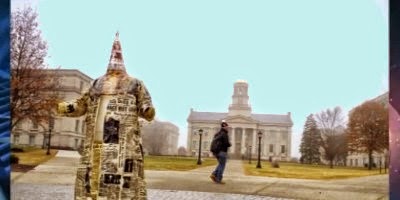 The White boogeyman is coming to get you! Run nigga, run!

“I was not able to execute my intention,” Tanyolacar said in his apology, which he posted on social media. “I sincerely apologize for the pain and suffering I caused to the African American community on Friday,” he said. “I am hoping that I will be able to be forgiven for the pain I have caused with my sculpture.”

I am savoring every word of this like fine wine. Bow before the negro, sanjay. Scourge yourself until the sins are forgiven.

Tanyolacar said in his note that the sculpture has some in the community perceiving him as racist but, in fact, he’s the father of a mix-raced 8-year-old boy who has faced “racism and prejudice.”

"I'm not a heretic! I love the Holy Mother Church! I used to be an altar boy!"

Before moving to Iowa City, Tanyolacar said he lived in Tennessee and Florida and, with racial tensions flaring nationally around the deaths of Michael Brown in Ferguson, Mo., and Eric Garner in New York, he hoped to “facilitate a dialogue with a community on a college campus.”

Yeah. Careful what you wish for, moron.

The UI School of Art and Art History hosted a public forum Monday night on the topic of “how controversial art is discussed and displayed in public.” And the UI NAACP is hosting a town-hall meeting Wednesday evening at the Iowa City Public Library titled, “Black Lives Matter.”

White lives don't matter. There is a War on Whites raging in the remains of the U.S.S.A. The entire rotten system is dedicated to our destruction. We owe it no loyalty. The answer is a White nation.
Anti-Racism Beat Whitey Night Communist Indoctrination Center Degenerate Art Grant Wood Art Colony KKK Sally Mason Serhat Tanyolacar University of Iowa Pentacrest War on Whites