December 16, 2014
Our national decline is now severe enough that the phony hate crimes that occur at our Communist Indoctrination Centers can't even manage a veneer of legitimacy. Combine a suicidal desire to "do the right thing" with the lazy and entitled attitude birthed by decades of White cowardice and what you get is a hoax that's so obvious you have to wonder how gullible and/or willfully ignorant you have to be to work in the dinosaur media. Despite the feeble attempt that happened at the most communist of all Communist Indoctrination Centers in the U.S.S.A. the jew was wailing about the precious six million, the negro was hooting and hollering and law enforcement and counselors were being deployed.

It turns out it was another lazy and talent-free attempt to create "anti-racist" "art." It seems like this new equality cargo cult might be replacing the phony hate crime. Why even bother, when cynical attempts to create "dialogue" generate the same Chicken Little response.

A group of anonymous artists claimed responsibility for effigies of two black men and a woman hanging from nooses on the University of California at Berkeley campus on Saturday.

Setting up literal straw men. Trust me, they're black, even though the end result resembled sacks of flour. Now take them down, crying and screeching for "justice" and more violence against Whites. Such as the rich day-to-day life of the "progressive" communist. 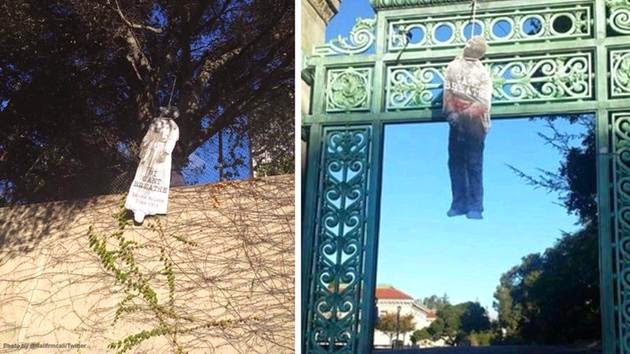 Dr. Pablo Gonzalez, a visiting research fellow at UC Berkeley, posted a statement by the artists on Twitter today that he said had been placed on a campus bulletin board.
Don't worry, doctor foreign invader is on the case, speaking with the "artists" in his broken English and spreading the word that this half-assed effort to create anti-White hatred was actually "art."

"These images connect past events to present ones -- referencing endemic faultlines of hatred and persecution that are and should be deeply unsettling to the American consciousness," the statement reads.

These work-shy attempts to vilify Whites connect past fictions to current ones. A pile of vile lies crafted by inept alien sodomites. It made national news. Consider that the next time a "setting a White hoe on fire" story gets the memory hole treatment.

UC Berkeley police initially responded to a report at 9:10 a.m. on Saturday of two effigies hanging from Sather Gate and quickly removed them.

There's a bag attached to a rope! Call the police! Get the F.B.I.! Where's Eric "My People" Holder???

The department received a report of a third effigy on the campanile, the large tower on UC Berkeley's campus, but it was already gone by the time police arrived, said UC Berkeley police spokeswoman Claire Holmes.

The quality workmanship of this new generation of brown alien sodomites.

"Garner, Brown, and others are victims of systemic racism," the statement said, referencing Michael Brown, an unarmed black man killed by a white police officer in Ferguson, Missouri, earlier this year.

This statement is as patently false and intellectually dishonest as everything else in this ridiculous incident.

The artists declined to identify themselves because they said, "this is not about us as artists, but about the growing movement to address these pervasive wrongs."

What a bunch of heroes. 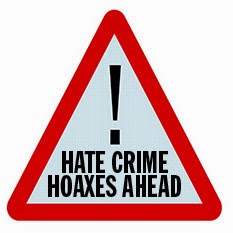