They Were Very Unhappy

December 23, 2014
The negro is never wrong and is never accountable for its own pathetic failure. We can't hold the "African American" to even the most modest standards of civilized White behavior, leaving nothing but denial and appeasement. We'll pretend they're not burning our cities, engaging in tribal warfare and regressing our dead nation into an African all against all. We'll keep paying, keep subsidizing the same predictable failure these evolutionary dead-ends have produced for decades. When there is no improvement, when their savage animal behavior gets worse instead of better, that clearly means that "more needs to be done." The endless useful crisis must continue. This next transfer of wealth, this next bout of pitiful groveling before a failed race will surely be the magic bullet that finally defeats stupid old reality.

In a Florida brewery they went ape.

An employee who works at a popular brewery in Coral Springs was seriously injured Sunday after he tried breaking up a fight between patrons and a waiter, police said.

Another forgotten victim, another addition to the massive human cost of allowing moronic and violent genetic aliens to share your living space. The War on Whites rages on. White lives don't matter.

"Well, that's the tenth call. Guess we should go over there and see what's wrong. Remember not to do anything to the pure and good negro, we don't want more burning cities."

No race given. Probably Frenchmen or something. 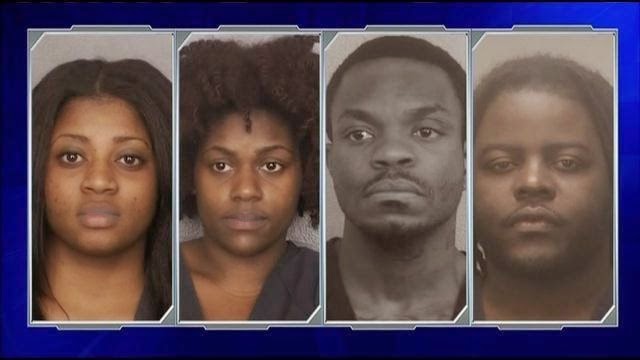 "The defendants began striking (victim) multiple times with closed fists and striking him with a glass mug," wrote an officer in his incident report. "(Victim) was transported to Coral Springs Medical Center, where he received 13 staples for his injuries."

There will be no marches for (victim), no calls for justice, no speeches from the mulatto sodomite. He was possibly disfigured for life by an animal attack. No one seems to care.

"Following the attack, the defendants continued to cause disruption within the restaurant, throwing multiple items -- chairs, glass mugs and Christmas ornaments," the officer added.

Our equals. We pretended they were human, ignoring massive evidence to the contrary.

"When it came time for the bill, their bill was in excess of $350," said Lt. Joe McHugh. "They were very unhappy with the bill. The management of the restaurant went back and actually discounted the bill to approximately $180."

America in miniature. "We gots da raht!" followed by negro appeasement. It didn't do any good. It never does.

Eurasha Fonseca, 25, was arrested while trying to flee from the restaurant. She's facing charges of aggravated assault, criminal mischief and disorderly conduct.

For whatever reason this negro wasn't "executed" by "races" officers, as the jew assures us routinely happens.

Police also arrested Abby Gay Thompson, 19. Thompson lied to police, giving them a fake name, so her real name wouldn't be on the report, investigators said.