December 02, 2014
Our president is meeting with various professional victim groups, vultures and racial con artists to discuss why Whites are bad and what new methods of pathetic negro appeasement can be implemented in the latest doomed attempt to fix a failed race. "We gots da raht!" they scream, as president butt-naked sagely nods and wonders what his jewish masters have in store for our dead nation. More needs to be done, a lot more. Certainly the magical solution that finally turns the negro into something resembling a civilized human being is just one more act of groveling and massive waste of money away. Meanwhile, in reality, two "teens" that victimized an elderly woman are facing the "races" justice system and a likely slap on the paw.

Two teens, linked to a New Dorp home invasion earlier this year in which a 94-year-old woman was victimized, pleaded guilty Monday to felony charges.

Race erased. Those crazy kids and their harmless little pranks. The elderly are targeted, the weak and vulnerable singled out by shit-colored cowards. There is no national outrage, no speeches from a Kenyan sodomite. Only the silence of the grave, the dead calm that follows that terrible moment when all hope is lost. The U.S.S.A. is gone.

According to authorities, Alvin Bestman, then 16, of Clifton, and Shaquawn Coleman, then 18, of Stapleton, entered the senior citizen's Dalton Avenue home through the rear bathroom window on June 3.

Still not sure if you need to be armed?

They snatched property valued at more than $3,000, including a wallet, jewelry, a laptop and a tablet computer, police said.

The content of their character. Future college students, gentle noble savages crawling through a bathroom window. On the way to Grandma's, just have to stop and terrorize another person's Grandma first.

The victim, who lives at the apartment with a 39-year-old woman, was home alone at the time, said cops. The suspects came upon her, asked, "Where's the money?" then fled, the indictment said.

You know your country is dead when my first thought was "At least she wasn't beaten, murdered or raped." 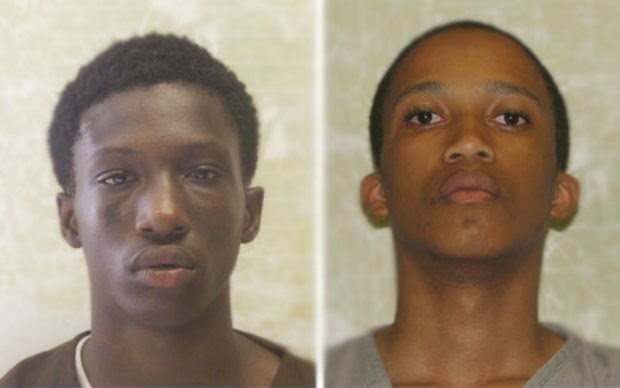 Living fossils preyed on the old.

Shortly after the incident, Bestman was busted in Clifton for allegedly smoking pot. In his pocket, police found a MetroCard, bearing the senior's name and photograph, court papers allege. Photo MetroCards with reduced fare are available to seniors 65 and older.

Luckily the 70 I.Q. led to an arrest. Let's keep an identification card from our victim so we can get a slight discount on negro-ruined mass transit.

Coleman, meanwhile, was also accused of breaking into a home on the 300 block of Ridgewood Avenue, Eltingville, on June 5. He swiped a computer and iPod valued at more than $1,000, along with a credit card, said an indictment.

Bestman faces 16 months to four years in prison, if sentenced as a youthful offender. However, he could be hit with a stiffer sentence of two and a third to seven years behind bars if sentenced as an adult.

Soon this worthless animal will be released back in a decaying society to commit more crimes.

Our mulatto president will fulfill the duties of tribal chieftain and appease the parasites. You'll get the bill. Our cities continue to burn. You'll get the bill for that, too. The final collapse seems more and more like a mercy and less like a disaster with each passing day. When it comes we must build a White nation.
Alvin Bestman Comrade Obama Death of a Nation Home Invasion Justice is Racist New Dorp Pathology of the American Negro Shaquawn Coleman Teens